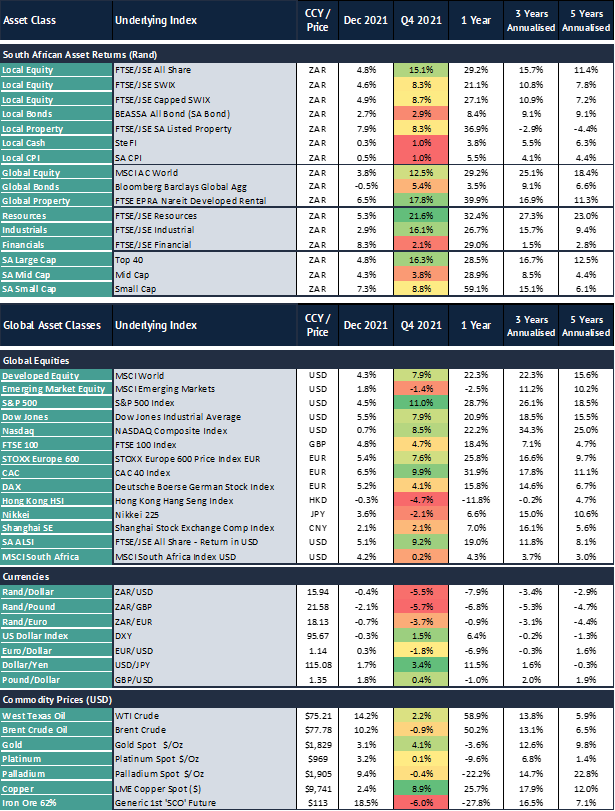 The fourth quarter saw extremely strong performance from western developed equity markets on the back of expectation-beating corporate profit upgrades, with the US leading the way. Asian equities and emerging markets struggled, dragged down by China which continued to push ahead with industry reforms and regulatory crackdowns resulting in headwinds for economic growth and investor sentiment (particularly the international community). Bond markets struggled under multi-decade high inflation prints raising market participant fears of inflation running ahead of central bankers. The increase in bond yields resulted in capital losses for bonds. Despite this, real yields remain deeply negative in most developed markets when comparing year-on-year inflation numbers to longer term 10-year bond yields.

The South African equity market performed well over the quarter, although the choice of benchmark made a significant difference in realised returns. The FTSE/JSE ALSI enjoyed a quarterly return which was almost twice that of the SWIX and Capped SWIX partly explained by extraordinary performance from its biggest holding, Richemont, and strong returns from resources. Richemont’s weight in the ALSI index moved from 10% in September 2021 to 14% at the end of December 2021 as the stock returned 55% over the three months (it accounts for 16% of the Top 40 index now too). The Naspers/Prosus stable fell from a combined weight of 11.5% in September to 9.8% in December, illustrating the direct link of the China tech crackdown on the South African markets. The strength of equities completely outshone returns available from local fixed income markets with the quarterly returns of local cash and bonds offering a “meagre” 1% and 2.9% (in rands) respectively.

Omicron variant throws a spanner in the works

The discovery of the Omicron variant in November 2021 initially sparked a selloff in markets for the following reasons:

As further data came in over the quarter, markets brushed aside these risks delivering strong returns in the last month of the quarter.

That said, the Omicron variant and other potential variants still pose a risk to economic and market outcomes in the coming year. Supply side bottlenecks have created first round inflationary pressures globally due to labour shortages and disruptions to the global supply chain. Although the progression of the virus looks to be evolving into a more endemic disease, guidance from WHO and others in the scientific community warn of this being too early to call.

“Zero-COVID” strategies, followed most notably by China, make for a volatile path of output in these countries. It also poses risks of localised lockdowns leading to further disruption to economic activity and the production of goods needed further down the supply chain (a good example of this was the lockdown of Xian in China which happens to be a large chip producing region, directly affecting companies such as Samsung Electronics and Micron Technologies).

China’s year of the Tiger

2021 was a difficult year for Chinese investors. Monetary and policy tightening coincided with a year of regulatory reconfiguration for the internet industry. A hopeful easing of tensions between the US and China under a Biden-led administration turned out to be overly optimistic with pressure from both sides continuing unabated. China’s offshore equity market lagged significantly throughout the year whilst mainland stocks (A-shares market), enjoyed better performance. The stark contrast in performance highlighted the difference in mood of the investor base with the offshore market predominantly traded by offshore investors and the mainland market dominated by Chinese local investors.

Moving into the year of the Tiger, it seems that the Chinese government seeks a “more stable and healthy economic environment” which coincides with steps already taken to loosen financial conditions. It is an important year politically for China as Beijing hosts the winter Olympics in February and Xi Jinping seeks a third term as president towards the latter part of 2022. Rapid fire regulatory change experienced in 2021 is expected to cool down as stability and certainty around quality growth in China is prioritised.

As US inflation broadens and accelerates (the last reading was 7% for 2021, core prices were up 5.5%) the Fed has turned more hawkish. Policymakers have acknowledged that their assessments of inflation may have been a bit too optimistic requiring a more aggressive tightening of monetary policy.

In its December Federal Open Market Committee (FOMC) meeting, the Fed doubled the pace of its asset purchase tapering and guided on three rate hikes in 2022.

Markets were expecting a gradual tightening of financial conditions, however, the change in tune from the Fed creates concern of the more acute risk of rates needing to move higher and faster than the Fed and market expect. 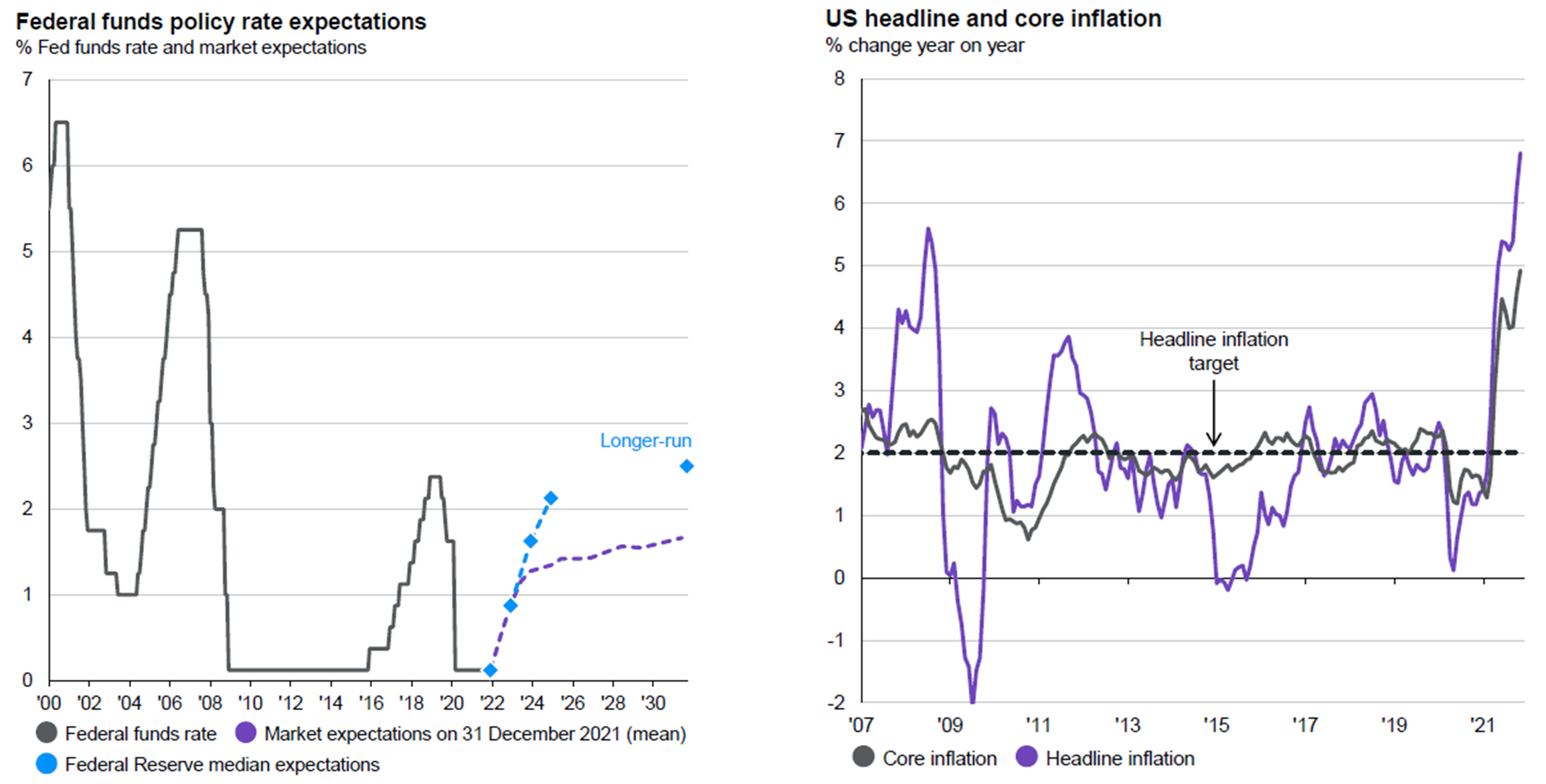 GDP figures released in the fourth quarter were for Q3 2021 and continue to be volatile given different patterns of COVID disruption and government support. They generally show reasonable growth though. Inflation increased during the fourth quarter almost universally whilst unemployment generally fell as restrictions were lifted and economies continued recovering. 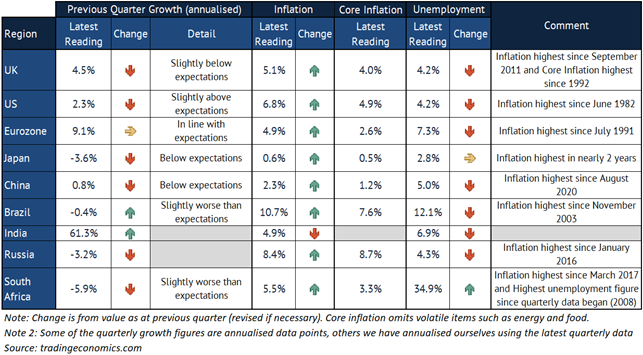 As we move from 2021 to 2022, market concerns over COVID are diminishing to be replaced with inflation worries and fears over monetary tightening by central banks to deal with inflation. Uncertainty in the withdrawals of central bank stimulus in the form of reduced central bank bond buying and higher interest rates (in the US and Europe) should result in elevated risk across markets. The things we will be looking out for include:

Our portfolios are built to withstand any number of scenarios through the judicious use of diversification by providing exposure to multiple return sources across the risk curve. Risk mitigation through sound portfolio engineering and portfolio construction provides our portfolios with the necessary defensive and offensive characteristics to weather the inevitable uncertainties associated with investing in capital markets.

The PortfolioMetrix BCI SA Equity fund outperformed by 0.7% over the past 12 months (26.1% vs 26.8% for the fund) relative to its FTSE JSE Capped SWIX benchmark,

The PortfolioMetrix BCI Bond FoF fund outperformed by 0.3% over the past 12 months (8.4% vs 8.7% for the fund) relative to its FTSE JSE All Bond Index benchmark,

The PortfolioMetrix BCI SA Property fund outperformed by 1.7% over the past 12 months (36.9% vs 38.6% for the fund) relative to its FTSE JSE SA Listed Property benchmark,

The PortfolioMetrix BCI Global Equity FoF fund underperformed by 1.7% over the past 12 months (28.8% vs 27.1% for the fund) relative to its MSCI ACWI benchmark,

The performance of the underlying funds (versus their respective regional indices) for the quarter is shown below (in USD). Unfortunately, active performance was the biggest attributor to underperformance over the quarter. Most active managers underperformed with the biggest laggard, Brown Advisory Mid Cap Growth fund, contributing most to negative alpha. On an absolute basis, exposure to Japanese equity and emerging markets also contributed meaningfully to underperformance. Unfortunately, it was not a good quarter from an active return’s perspective for the global equity building block.

The PortfolioMetrix BCI Global Bond fund underperformed by 0.4% over the past 12 months (3.5% vs 3.1% for the fund) relative to its Bloomberg Barclays Global Aggregate benchmark,

The PortfolioMetrix BCI Global Property fund outperformed by 0.2% over the past 12 months (41.3% vs 41.4% for the fund) relative to its FTSE EPRA Nareit Developed Rental benchmark,