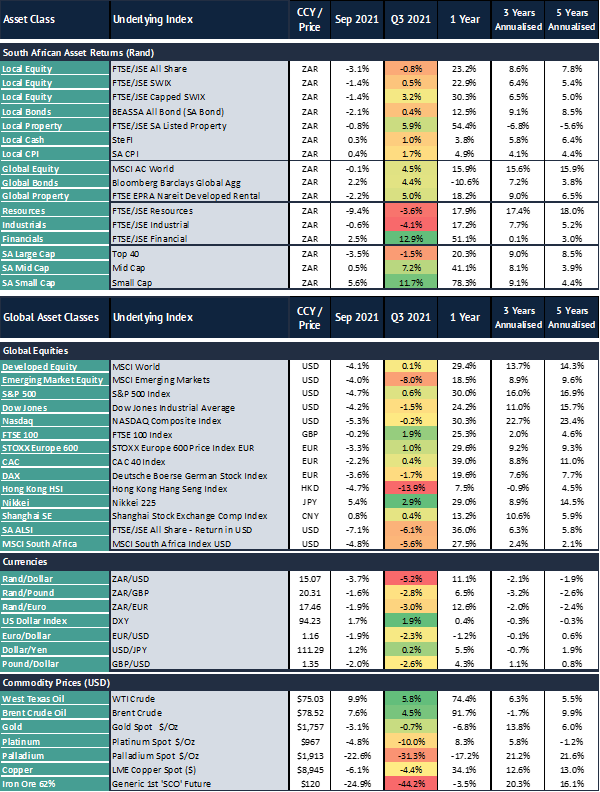 Towards the end of the third quarter of 2021, global equities saw their first sell-off in about a year as fears emerged that China’s heavily indebted property developer Evergrande Group might lead to the collapse of China’s systemically important real-estate market, as well as major central banks starting to indicate tighter monetary policy than markets expected. More generally, the quarter saw markets begin to worry more seriously about ‘Stagflation’, the worst of all worlds in the form of lower growth (stagnation) and rising prices (inflation). The previous narrative of reflation faltered as growth numbers softened, whilst reported inflation kept on rising.

In South Africa, the effects of Chinese policy risk were felt directly on the local market. Continued pressure on the Naspers / Prosus stable resulted in the two stocks falling 17% and 15% respectively. The resources sector also suffered a sharp correction in September falling over 9% for the month and 4% for the quarter. However, despite this the FTSE/JSE Capped SWIX still produced a positive return of 3% for the quarter driven by the financial sector as well as strong performance from the mid and small cap segments of the market.

Regulatory changes coming out of China has been a source of angst for global markets for a large part of the year now. Most recently the fears of an Evergrande default and potential knock-on effects were a contributing factor to the selloff in markets in September. But what started this and why now?

After a meeting in August 2020, China imposed the three red lines guidance on selected developers. This was done at a time when Chinese property was experiencing significant increases in land prices, booming sales and growing debt levels. To control excessive leverage in the industry, regulators imposed certain criteria that, depending on their adherence to these criteria, would dictate the levels of borrowing they could take on (access to finance). The criteria were as follows:

If a developer met all criteria, they had greater access to debt than otherwise, as detailed below:

Evergrande’s level of debt has been a concern for many years now and the implementation of the three red lines accelerated the decline for the company due to their poor debt metrics. The reason why it all came to a head in September was that debt repayments came due, and the company simply did not have the liquidity to honour these. It is an ongoing saga with restructuring required.

But should we be worried?  As it relates directly to Evergrande we think that the Chinese government have sufficient resources to manage the crisis successfully. However, Chinese property is a big contributor to GDP growth and so the broader issues surrounding the sector certainly pose a growth risk to the country and hence global growth.

Inflation numbers across the globe are high and the most recent U.S. inflation figure is the highest read since 2008.

Contributing factors to global inflation have worsened and markets are concerned that higher inflation will be around for longer. Logjams at ports in the U.S. pose serious logistical issues that need to be addressed in the lead up to Christmas as demand for goods are likely to pick up.

Although stagflation risks have accelerated, these periods are typically precipitated by a yield curve flattening, and then inverting. However, over the last month the yield curve has steepened: 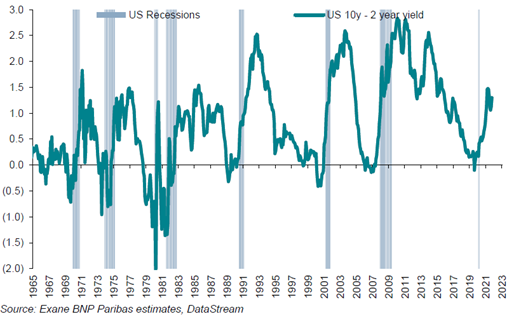 That said, risks to inflation are high as supply bottlenecks worsen and a recent energy price surge reminds us that growth needs energy. The fact that globally we are undertaking the greatest energy shift in history in a (justified) aggressive manner certainly means that it will not be plain sailing. 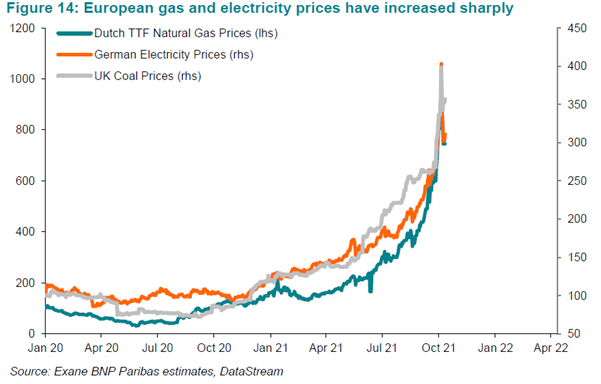 Although we still think that many of the factors driving up inflation right now are transitory this cannot be a static view held indefinitely. The global energy transition to greener sources have resulted in higher energy costs in Europe, power outages in China and the UK needing to fire up old coal-fired power stations to meet demand (and try to cushion price spikes). Currently, fossil fuels satisfy 83% of primary-energy demand and this needs to fall towards zero. With low inventories in fuel sources, the system is more vulnerable to shocks and the transition away from fossil fuels will be bumpy, if not carefully managed.

For now, the growth backdrop remains robust, inflationary pressures are expected to ease going into 2022 and central banks are still accommodative. This is generally supportive of risky assets.

GDP figures released in the third quarter were for Q2 2021, where many developed markets were bouncing back from winter spikes in COVID and so showed solid growth. Inflation increased during the third quarter overall whilst unemployment generally fell as restrictions were lifted and economies continued recovering. 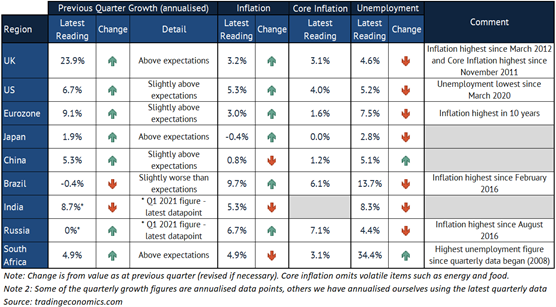 There was little change in developed market central bank action over the quarter as rates were kept low and central bankers maintained quantitative easing, although there was certainly more hawkish messaging around future rate rises and tapering of bond purchases. A number of emerging markets raised rates to control surging inflation in their local markets. 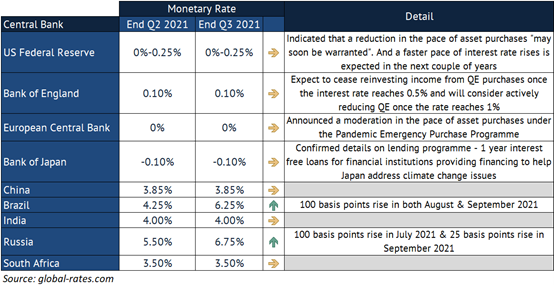 Despite the inflation risks, we are still cautiously optimistic around our portfolios. From a global investor’s perspective, it’s difficult to make a very attractive case for cash and bonds under a high inflation scenario. Ignoring for now more alternative assets, this boils down to acknowledging that mainstream portfolios have three main asset classes to choose from: cash, bonds and equities. With cash and bonds looking unattractive, equities are seen as the only remaining asset class for protecting and growing wealth going forward. This should continue to support investor demand for the asset class, provided global growth does not decline too severely. Equity valuations have also reined in from the end of 2020 leaving a constructive backdrop despite the risks. 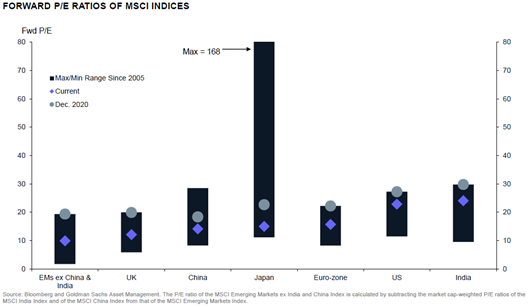 This is not to say that cash and bonds should not form a part of portfolios. In fact, there are very good reasons why these asset classes should remain in most well-diversified, appropriately risked portfolios.

As is always the case, there are risks that may or may not materialise and portfolios need to be able to weather either scenario. Our portfolios continue to hold many diversified return sources and we believe that this is the best way to navigate what is likely to be a risky and unpredictable environment.

The PortfolioMetrix BCI SA Equity fund outperformed by 3.6% over the past 12 months (29.4% vs 33% for the fund) relative to its FTSE JSE Capped SWIX benchmark,

The PortfolioMetrix BCI Bond FoF fund outperformed by 0.4% over the past 12 months (12.5% vs 12.9% for the fund) relative to its FTSE JSE All Bond Index benchmark,

During the course if 2021 Q1 the Stanlib Bond Fund was reintroduced to portfolios. Further changes were implemented during the course of 2021 Q2, these changes have brought about efficiency in the implementation of the PortfolioMetrix SA Bond Fund. The target weightings are as follows:

These changes were addressed in a dedicated session, should you have missed the event then please follow this link for more information.

The PortfolioMetrix BCI SA Property fund underperformed by 0.4% over the past 12 months (54.4% vs 54% for the fund) relative to its FTSE JSE SA Listed Property benchmark,

The PortfolioMetrix BCI Global Equity FoF fund outperformed by 2.8% over the past 12 months (14.9% vs 17.8% for the fund) relative to its MSCI ACWI benchmark,

The performance of the underlying funds (versus their respective regional indices) for the quarter is shown below (in ZAR). Strong outperformance in developed Europe drove alpha as all fund selections in the region outperformed. Main alpha drivers were Jupiter European, Miton European and Liontrust Special Situations. Matthews Asia continued to perform well in the emerging Asia region despite difficult conditions given China’s dominance of the market. The biggest underperformer was the Baillie Gifford Japanese fund followed by the Brown Advisory Mid Cap Growth fund.

The PortfolioMetrix BCI Global Bond fund underperformed by 0.9% over the past 12 months (-10.6% vs -11.5% for the fund) relative to its Bloomberg Barclays Global Aggregate benchmark, 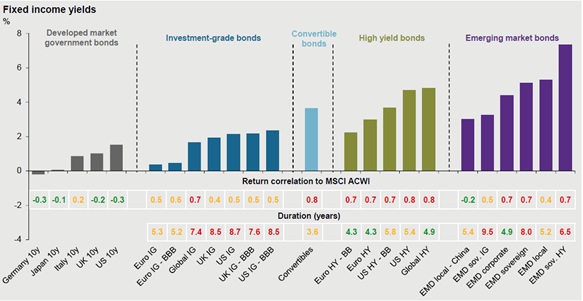 The PortfolioMetrix BCI Global Property fund underperformed by 4.6% over the past 12 months (18.8% vs 14.2% for the fund) relative to its FTSE EPRA Nareit Developed Rental benchmark,