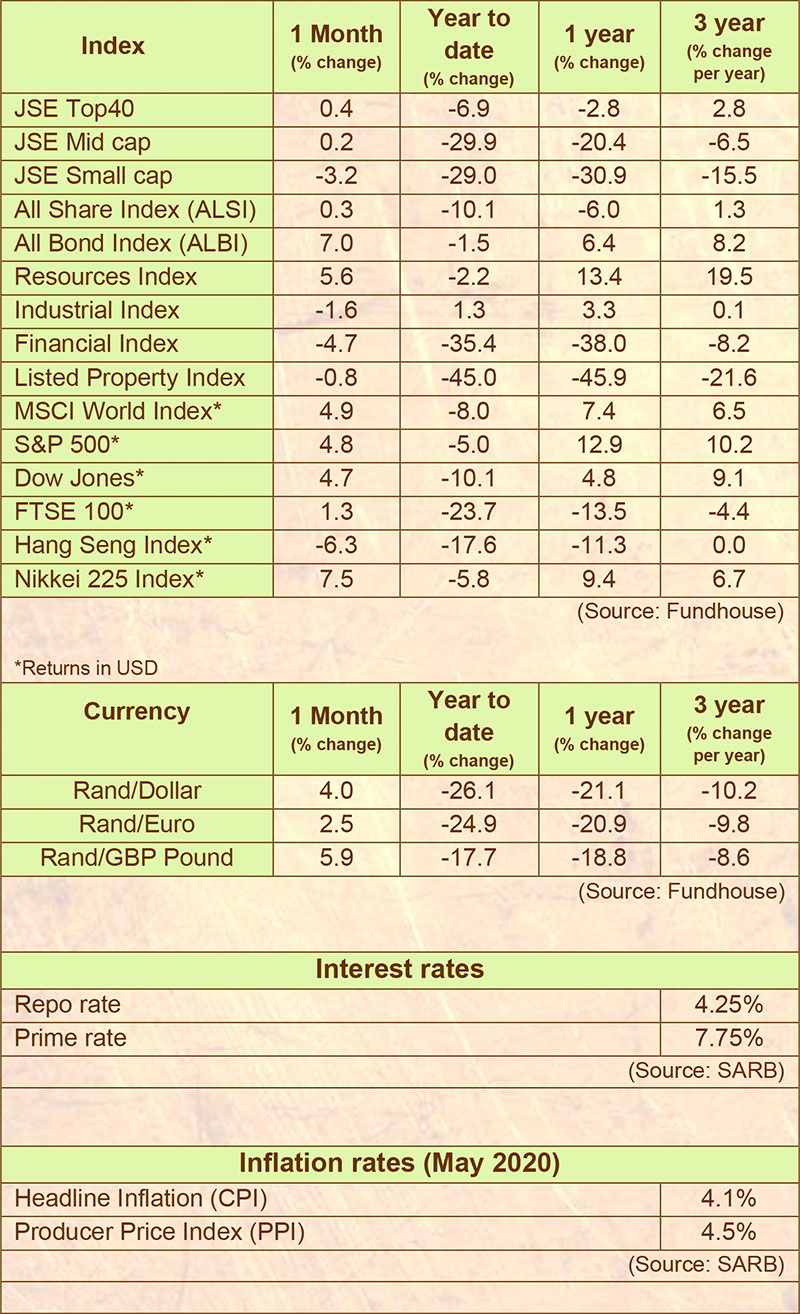 On 6 May, the SA petrol price declined by a further R1.74/lt to its lowest price since September 2016 (R12.22/lt – Gauteng). This is a result of the slump in international oil prices driven by a lack of demand and limited storage capacity to accommodate high global production.

S&P cut SA international credit rating further from BB to BB- (three notches below investment grade). There was a revised outlook from negative to stable as the downgrade was largely expected.
The SARB decided to cut the repo rate once again by a further 50bps to 3.75% in May. Rates were also reduced in March and April by 100bps each. The continued aggressive rate cuts had a negative impact on the Rand. Market expectations are for another 25-50bp cut before the end of the year.

The US began to relax their lockdown measures in May despite some states still showing increases in daily infections. US unemployment jumped to a record high of 14.7% in April and is expected to rise further in May.

European countries have been tentatively opening their economies throughout the month. The EU unveiled a plan to borrow 750 billion euros to aid economic recovery. 500 billion euros will be made available in the form of grants and 250 billion euros in loans. Stock markets across Europe rallied strongly as this stimulus package was unveiled. Part of the stimulus is intended to support a transition to a greener and more digital economy.

The fall in Japan’s first-quarter GDP came in at -0.9% (-3.4% annualized). This is the second quarter in a row that the Japanese economy has contracted.

Geopolitical risk has returned to the forefront. Tension between China and the US has increased due to a different narrative on the virus outbreak and China’s plan to impose a strict national security law in Hong Kong.

Disclaimer:
The above information is only for informative purposes and cannot be seen as advice as defined in the Financial Advisory and Intermediary Services Act, 37 of 2002. Although the necessary measures were taken in the preparation of this document, RiG Advisory Services (Pty) Ltd cannot be held responsible for any actions taken as a result of this document. Consult us for personal advice that will be appropriate for your unique circumstances. RiG Advisory Services (Pty) Ltd is an authorised financial services provider (FSP number: 44730).