Q1 2020 is a quarter that no-one across the globe will ever forget, even though most of us would certainly like to. Almost all asset classes (in local currency terms) plunged into a very sharp crash in March, the speed of which took most investors by surprise. One pivotal and unprecedented driver; a black swan event that no-one could have predicted (except perhaps Bill Gates a couple years back), the Coronavirus pandemic, shaped both investments as well as macroeconomics and policy response in this first quarter of 2020.

A summary of asset class performance (in rands) for March, Q1 and 2019 is shown in the table and chart below. Besides cash and gold, the safety net in this historic quarter were the global asset classes, although almost all these gains relate to translation of a weak rand. Noticeably the losses far outweigh the few green blocks, with oil, property stocks, midcaps and financials suffering severe declines over the quarter and month of March as well. 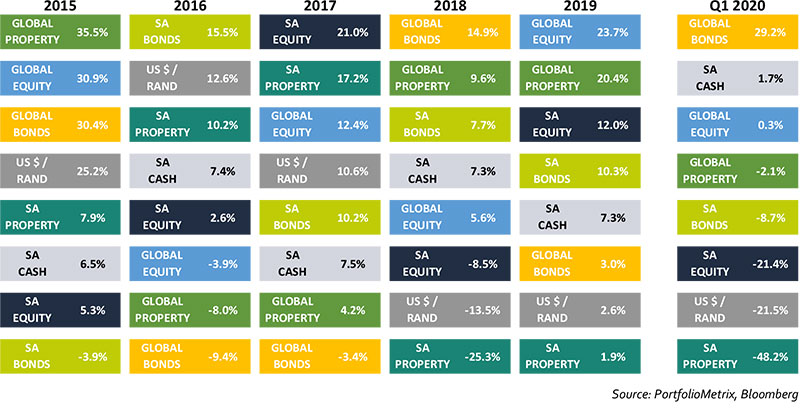 This first quarter of 2020 has brought about a swift market crash that no-one saw coming. In reality, indicators had turned more positive by the end of December and renewed optimism mounted post the signing of Phase One of the US-Chinese Trade Deal. However, the coronavirus (Covid-19) pandemic and its impact across the globe has completely unravelled any thoughts or forecasts of an improving economic backdrop to the New Year.

1. A new dawn of volatility and crises

A new dawn of uncertainty peaked in March in response to three, somewhat interlinked shocks, that saw volatility indices spike and equity markets crash. These included: 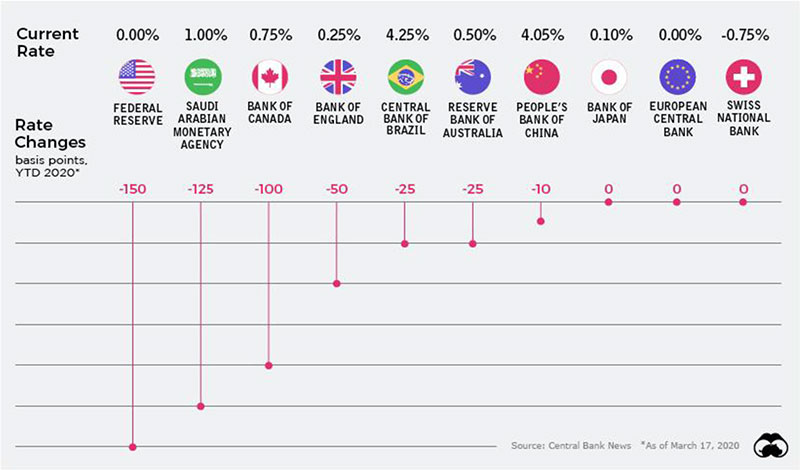 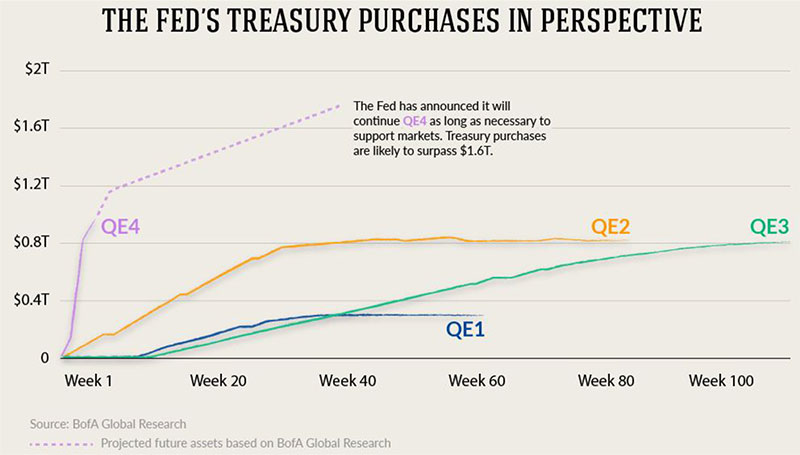 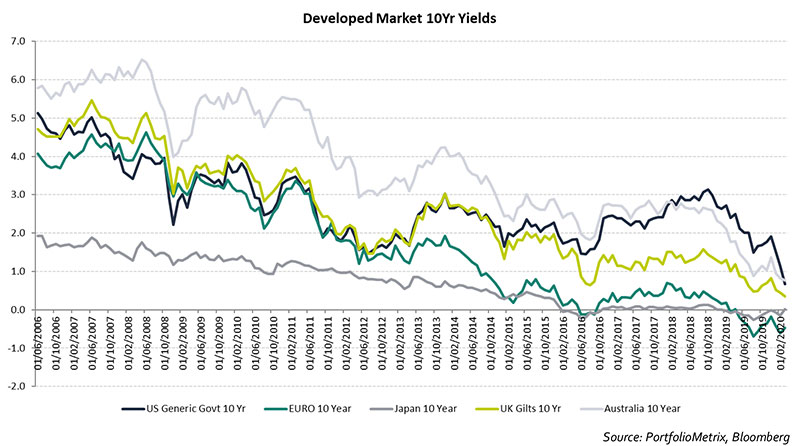 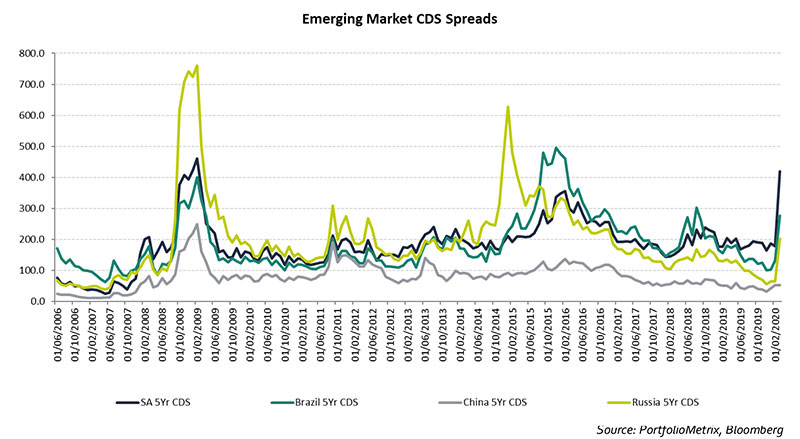 What does this mean for investors? The downgrade had largely been priced into markets and thus ultimately did not invoke a significant negative or knee-jerk reaction, certainly in light of the new dawn of crises unfolding. A sell-off in the rand did ensue, although with so much else going on, it would be hard to lay blame solely on the downgrade. We have subsequently seen the currency stabilize and reverse some of the depreciation seen leading into this quarter-end downgrade. 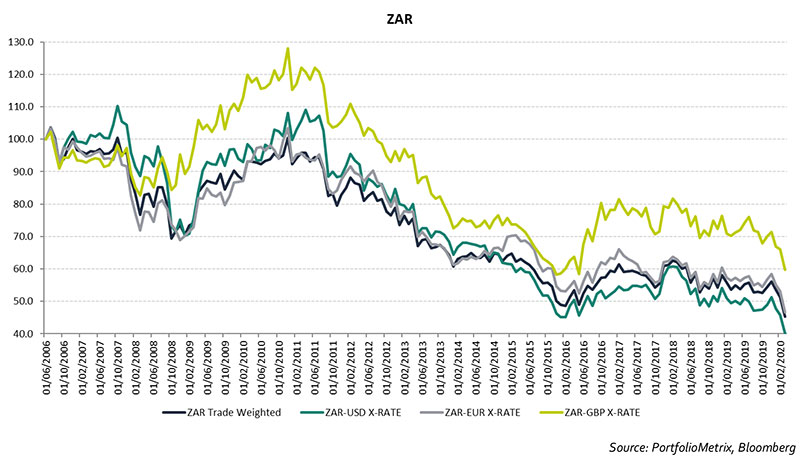 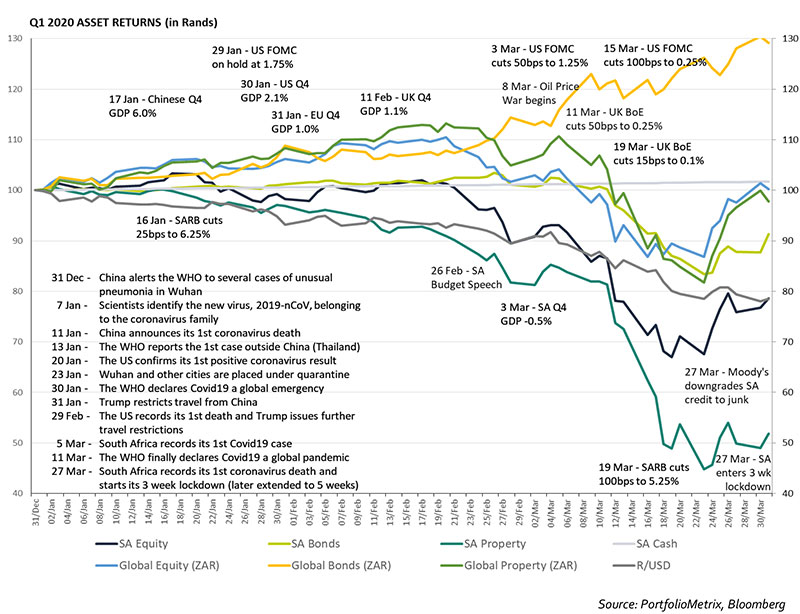 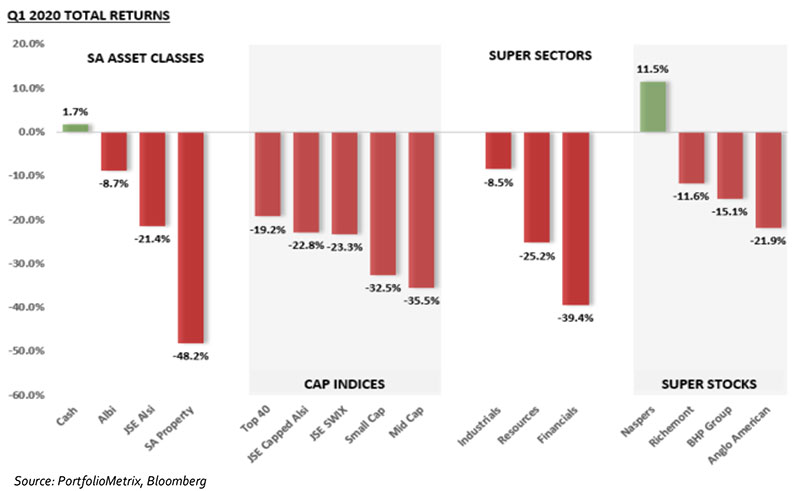 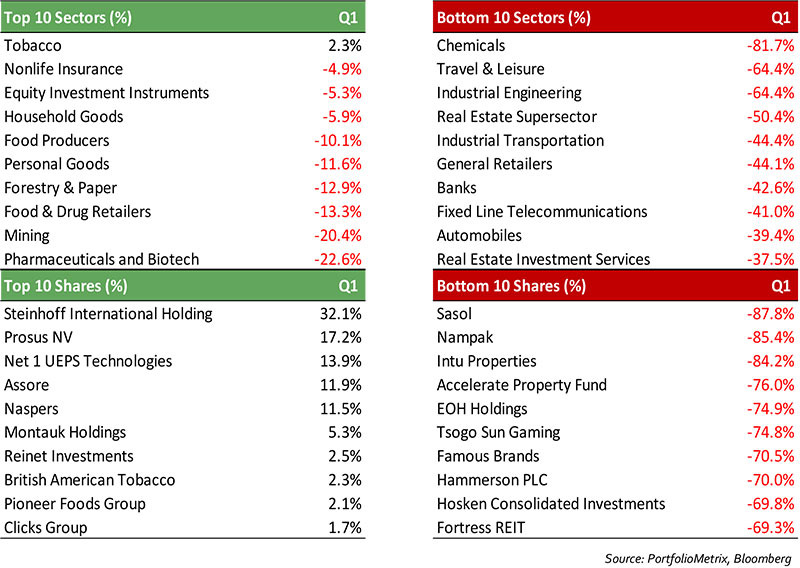 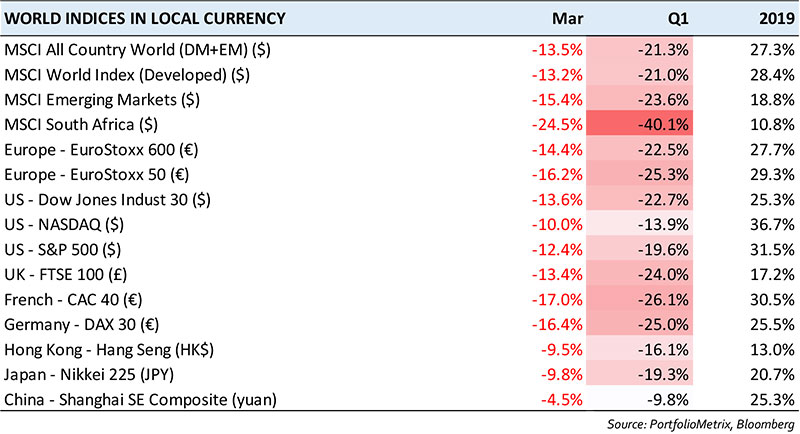 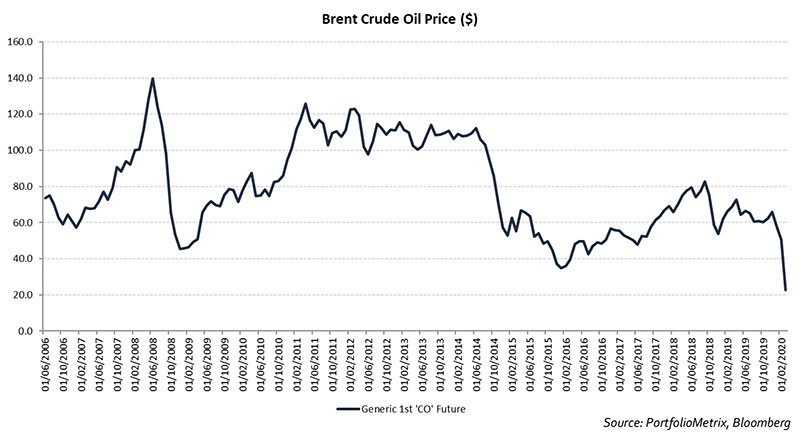 Gold is buoyed by its safe-haven characteristics, platinum suffers the coronavirus demand shock 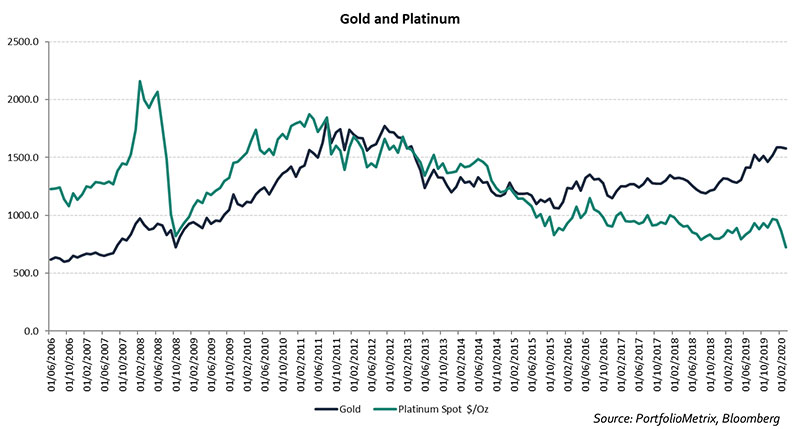 Q1 2020 has knocked SA risk asset returns not only in the very short term but has understandably detracted from longer term averages that now see local equity and property having lost money over the past 1, 3 and 5 years. Hard to fathom that holding cash over the past 5 years has shielded you from the vagaries of our other SA asset classes. The standout disappointment over almost all periods since 2010 has been SA property. Previously the darling of the JSE, this significant downside has been skewed over the past two and a bit years.

What the charts below continue to highlight, is that diversification across the risk asset class spectrum is your biggest cushion against uncertainty, and as evidenced, diversifying across geographies is also important. An investment in global equity over all longer periods has significantly benefitted the South African investor. 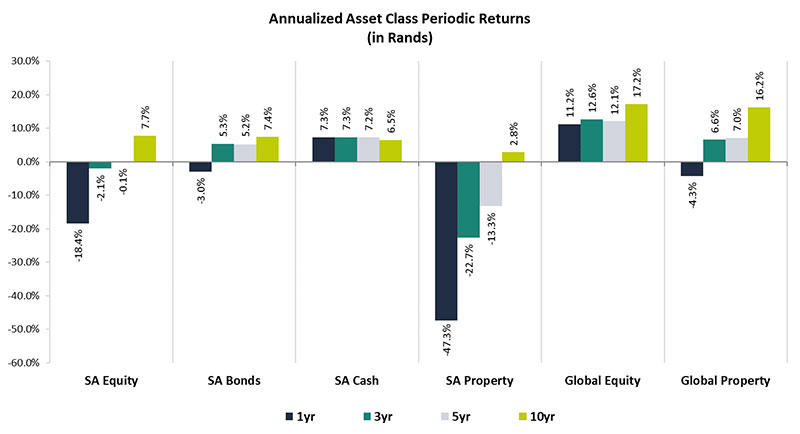 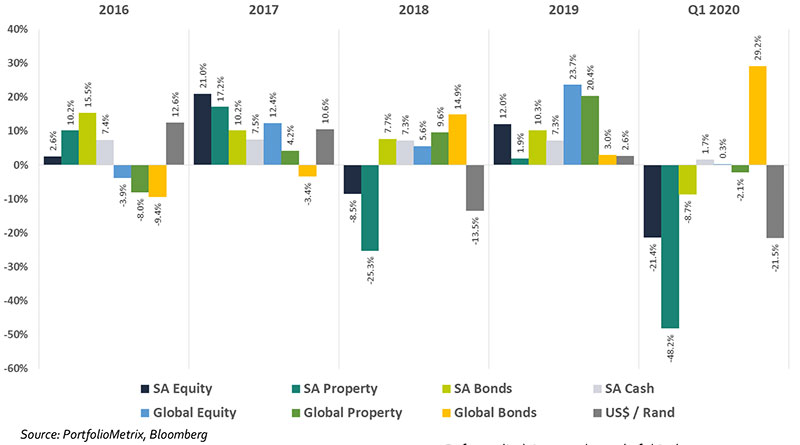 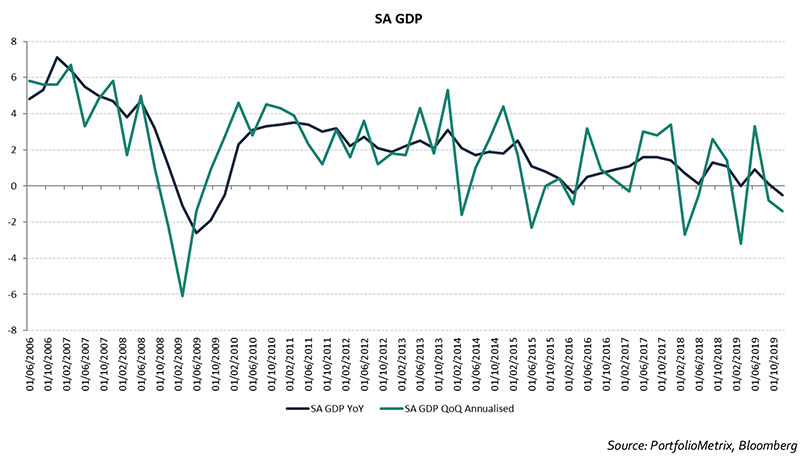 The SARB cut the repo rate by 25bps at the January MPC and followed up with a full 100bps in March. (A further 100bps emergency cut announced yesterday 14 April)

Inflation has steadily increased from November lows, February data at 4.6% 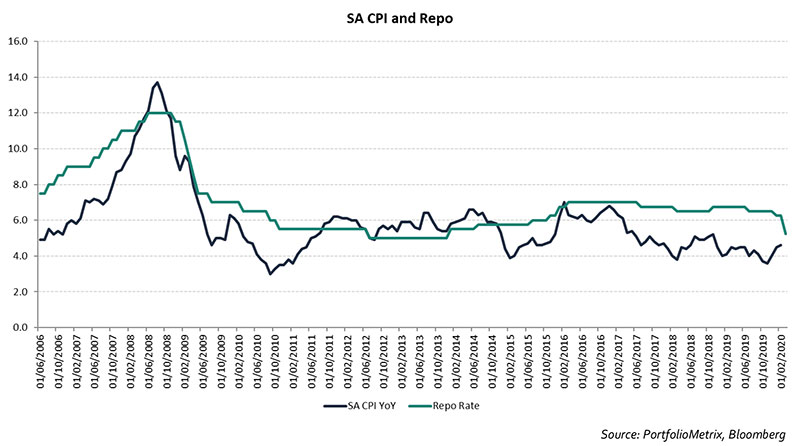 Business confidence fell to its lowest level in over two decades 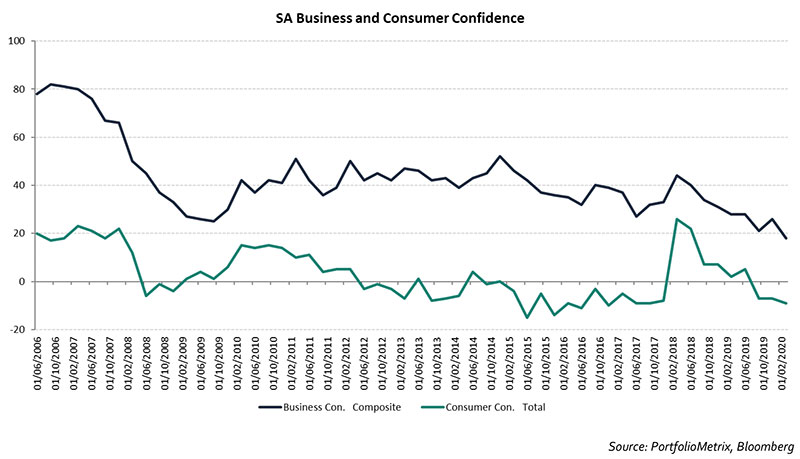 SA unemployment is expected to worsen over the remainder of 2020 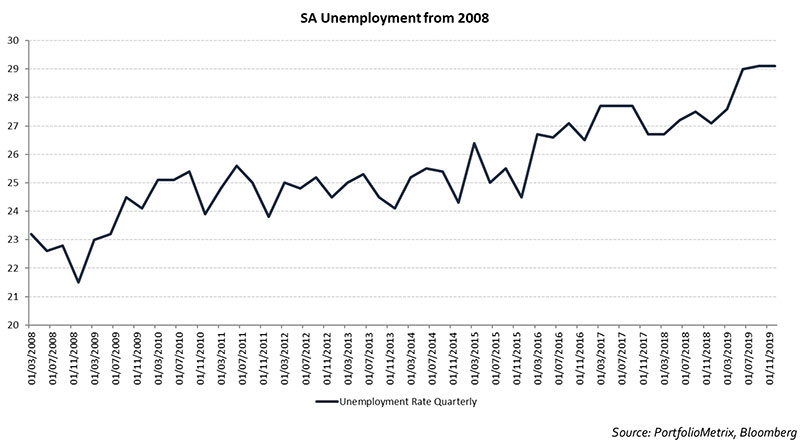 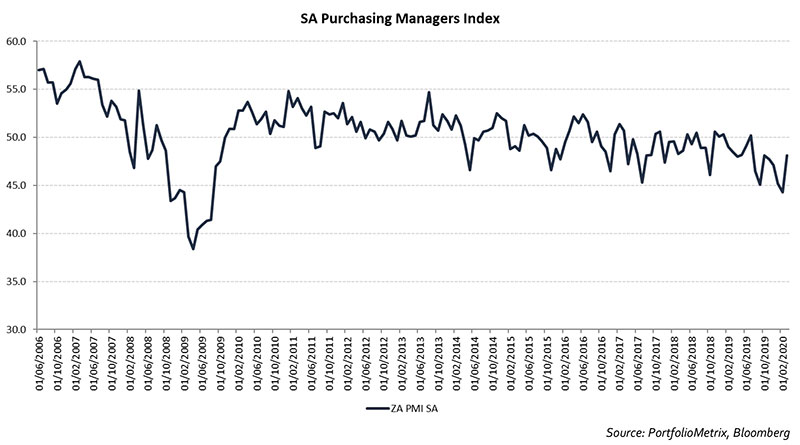 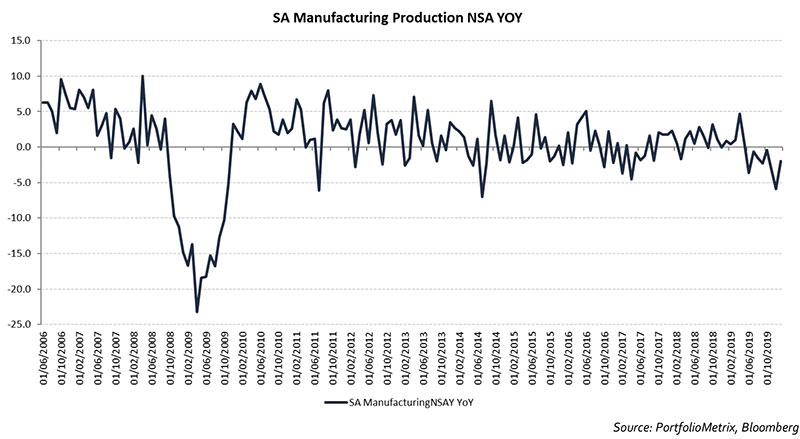 LOOKING AHEAD – Darkest before the Dawn

The coronavirus is guaranteed to throw the world into recession, but economists are grappling with what the recovery looks like thereafter. The base case for forecasters is that a recovery, perhaps even an ambitious V-shaped one, gets under way in the second half of 2020. But as the pandemic spreads through Europe and the Americas, and the wide range of knock-on effects comes into clearer view, caveats to that snapback to growth are piling up.

Underlying all forecasts is the simple fact that economic outcomes hinge on something that’s beyond the professional competence of most economists to forecast at this juncture: the trajectory of the disease itself. There is no certainty that the virus will be eradicated by the end of the second quarter, and strong chances that it won’t. If it lasts through the Northern Hemisphere’s summer months, then all the economic effects are likely to be amplified.

Thus rather than postulate the extent of what, how and when that recovery unfolds, investors can take some level of comfort that we at PortfolioMetrix continue to monitor and assess this daily changing landscape. It is times like this that the PortfolioMetrix methodology and risk-based approach has to provide some confidence and trust in staying composed, diversified and that this time shall surely pass. And with it, comes opportunity and clarity that continues to instil optimism in the long-term potential of all our portfolios going forward.

PortfolioMetrix (Pty) Ltd is an Authorised Financial Services Provider in South Africa. The information contained is given for information purposes only and is not intended to constitute financial, legal, tax, investment or other professional advice and should not be relied upon as such. Investments can go down as well as up and past performance is not a guide to the future. Data sourced from Bloomberg, FactSet, IMF, Investec Asset Management, RMB Global Markets, TRowe Price, Schroders, Lazard Asset Management and SA dailies (Business Report, Business Day)