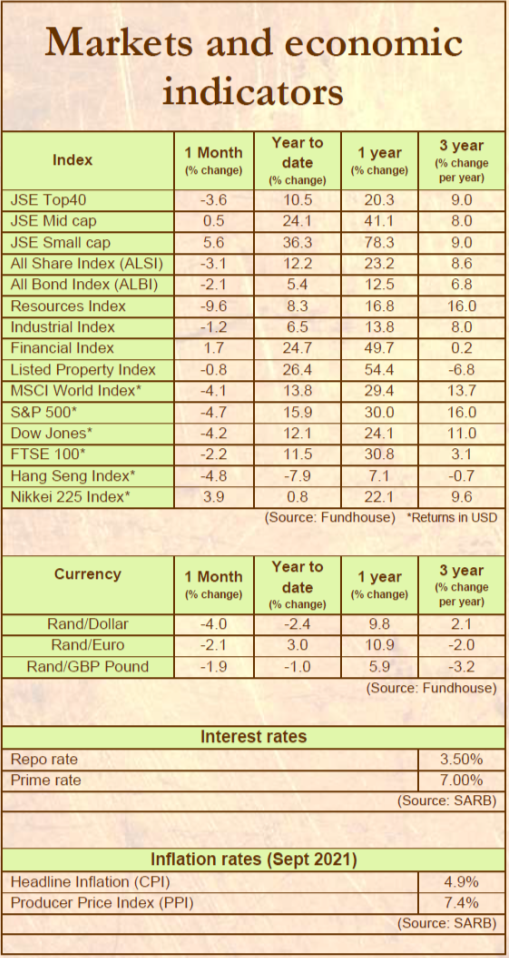 On the 30th of September, President Cyril Ramaphosa announced the move to Level 1 lockdown. Caution remains an ongoing theme, as talks continue of a potential fourth wave over the December period.

The MPC met on the 23rd of September, where they unanimously decided to keep the repo-rate unchanged at 3.5%, with Prime remaining at 7%. The repo rate has remained unchanged for 15 months. Given the tone of the last MPC meeting, it is expected that the SARB will raise the repo rate when they meet in November this year.

The SA Market struggled in September, due to a pull-back of the resource sector, which resulted in a 3.14% loss on the ALSI for the month. Although Naspers managed a small gain, the recent underperformance of Prosus leaves the combined effect of the two stocks down 22% in aggregate YTD. Sasol, however, brought some light to the situation, returning 27% as they benefited from the global energy material shortage.

The US continues to grapple with the third wave of Covid, with the Delta variant causing a surge in cases and leading to more hospitalizations and deaths. September proved to be a tough month for Global markets, as most markets closed in the red for the month.  The US Government had also managed to avoid a partial shutdown, at least until the 3rd of December.

China officially declared all crypto-currency transactions as illegal. This follows after an original decision to ban trading of crypto back in 2019, led to a continuation of trade through foreign exchanges. The price of bitcoin fell by more than $2000 in the wake of the announcement by China but has subsequently recovered.