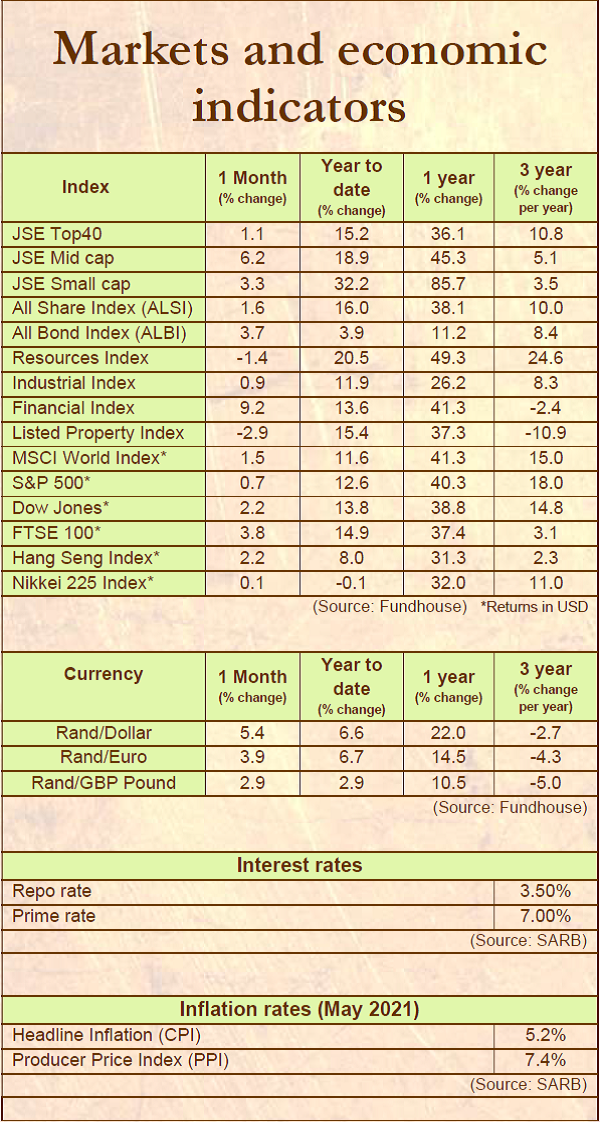 An influx of reported COVID-19 cases hit South Africa in May, leading to a steep increase in COVID-19 related hospitalisations and mortalities, as new cases started rising closer to the official threshold of a third wave. Phase two of SA’s vaccination programme was launched around mid-month, starting with those aged 60 and older.

In another unanimous decision, the Reserve Bank’s Monetary Policy Committee kept the repo rate unchanged at 3.5% for the fifth consecutive meeting. The GDP growth forecast for 2021 was revised upwards to 4.2%.

Public enterprises minister, Pravin Gordhan, announced some good news: that the beleaguered Eskom had managed to reduce its debt by almost a fifth. The power utility once again experienced a shortage of generation capacity in May which led to bouts of load shedding at very short notice.

After a steady start to the year, global market returns were more muted in May, balancing improving economic data with the rise in input prices and the possibility of higher inflation further down the line. COVID-19 infection rates are easing in most developed economies. More than 50% of the US population and more than 39 million people in the UK had received at least one vaccination shot by the end of May.

Most developed countries saw an upgrade in growth forecasts for the year. The US is now forecast to grow by 6.9% in 2021. Forecasts for GDP growth in the UK increased from 5.1% to 7.2%, the fastest growth since 1941. The European Union also saw an upgrade in growth forecasts, with GDP now expected to reach 4.2% for the year.  May saw a massive selloff in crypto currencies. Bitcoin dropped a staggering 35% during the month.

The extreme volatility in crypto currencies, the concerns around global inflation, as well as the weaker US dollar, pushed gold prices up.