After the tumultuous coronavirus-driven crash of Q1 2020, the second quarter provided just as much excitement with the pendulum swinging back strongly. From the precipitous declines in excess of 20% in the first quarter, equity and commodity markets rallied sharply and recovered much of these losses. What became evident is that equity investors are feeling far more confident in the shape and hence speed of the global economic recovery, thanks to the mountain of stimulus being provided by the central banks.

A summary of asset class performance (in rands) for June, Q2 and Year-to-Date 2020 is shown in the table and chart below. Noticeably there is no red-shading for this quarter with the strongest gains seen across risk assets with global bonds and cash the underperformers. The clear winner for the quarter being Resources driven by commodity prices that have responded to the quick recovery in Chinese manufacturing data. Also noteworthy is the rebound in ailing SA property stocks, however still languishing in their YTD returns. The Mid-Cap space continues to lag, predominantly due to their exposure towards SA domestic names, (banks and retailers). 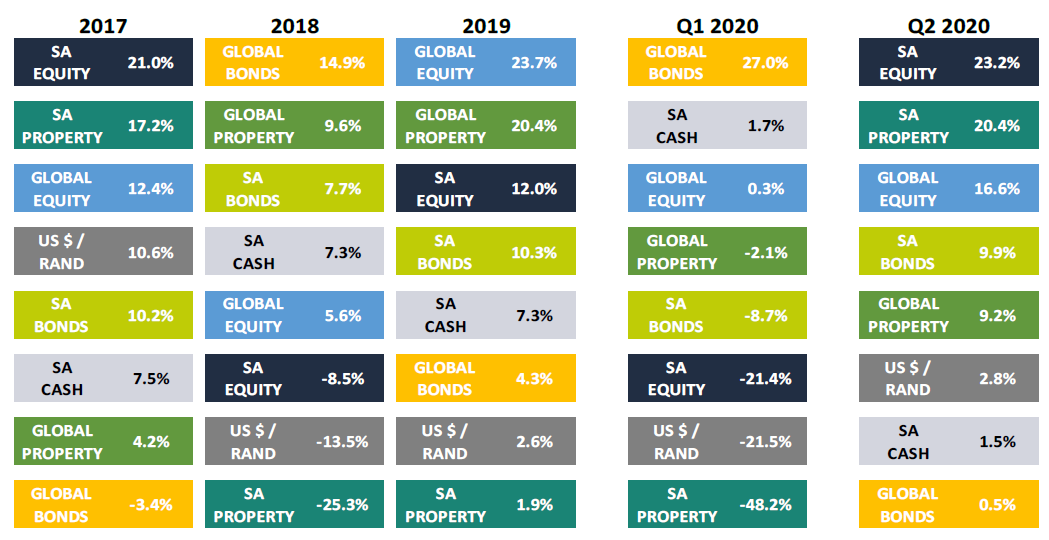 Just as the first quarter of 2020 brought about a swift market crash that no-one saw coming, so did the second quarter bring about just as swift a recovery that many did not foresee. The JSE recorded its best quarter performance since 2001 and the drivers of this rebound in sentiment are all largely global-related. The domestic macro-economic backdrop remains a severe drag and once again highlighted in the June Supplementary Budget speech given by our Finance Minister, Tito Mboweni.

2. Central Banks to the rescue 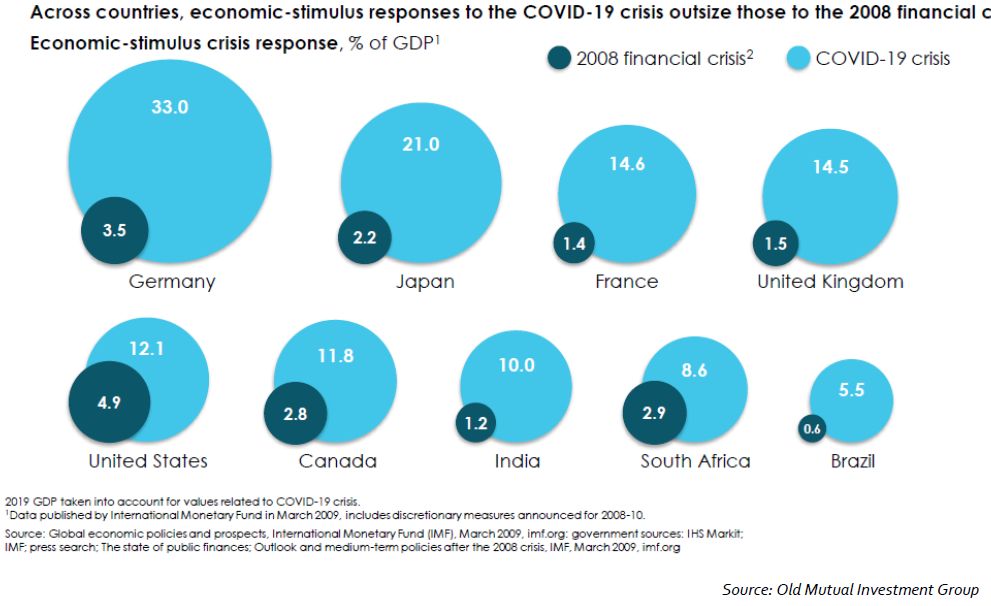 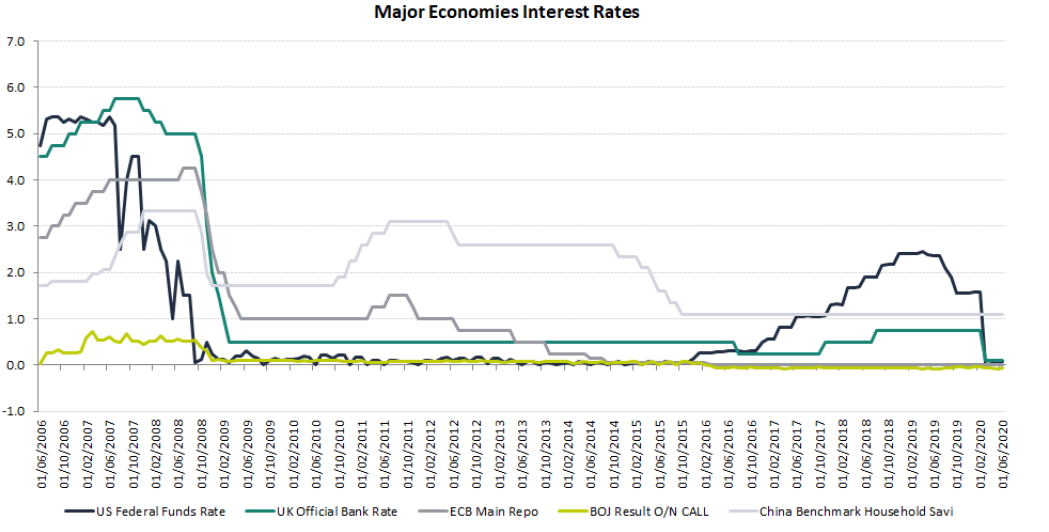 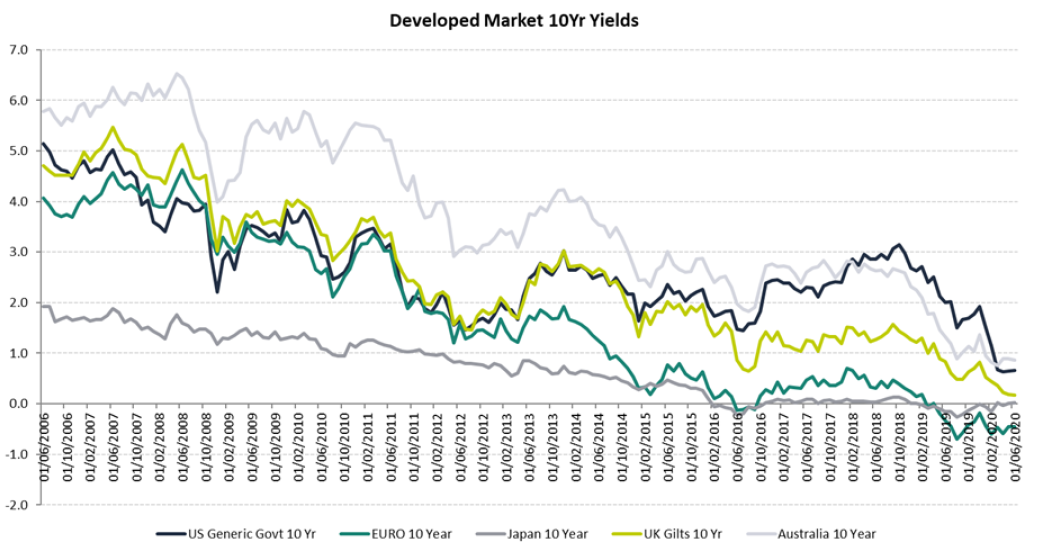 4. China leads the way, spurs hope of a V-shape recovery

6. The most “crowded trade” in recent history arouses retail investors

7. SA – Headed towards a debt cliff, quite possibly?

Given the fiscal cliff faced by South Africa, the Rand did well to recover its April-May record weak levels against the US dollar and found solace in the increasing risk appetite presented by improving global indicators as well as soft dollar. 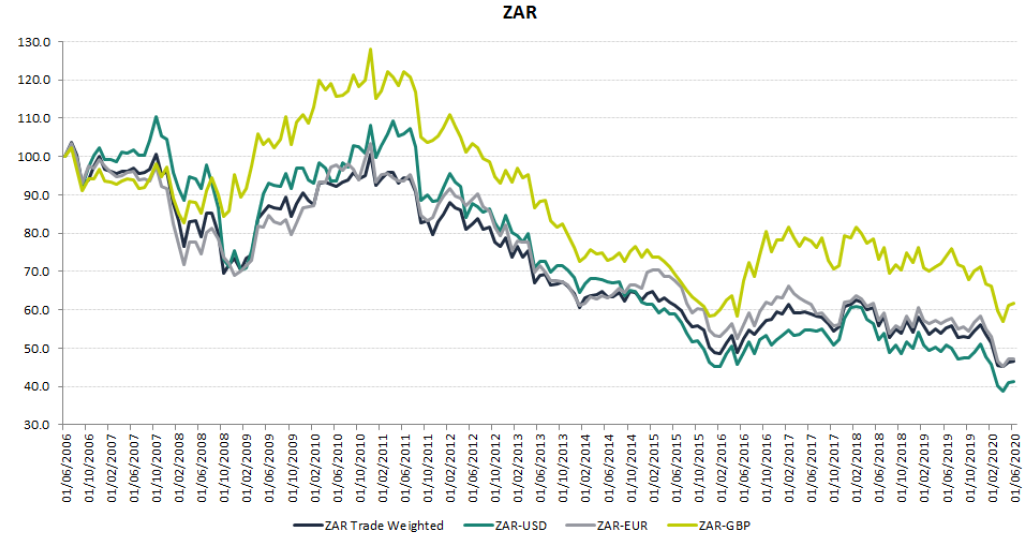 Q2 – TIMELINE OF KEY EVENTS AND THE SHAPE OF ASSET PERFORMANCE 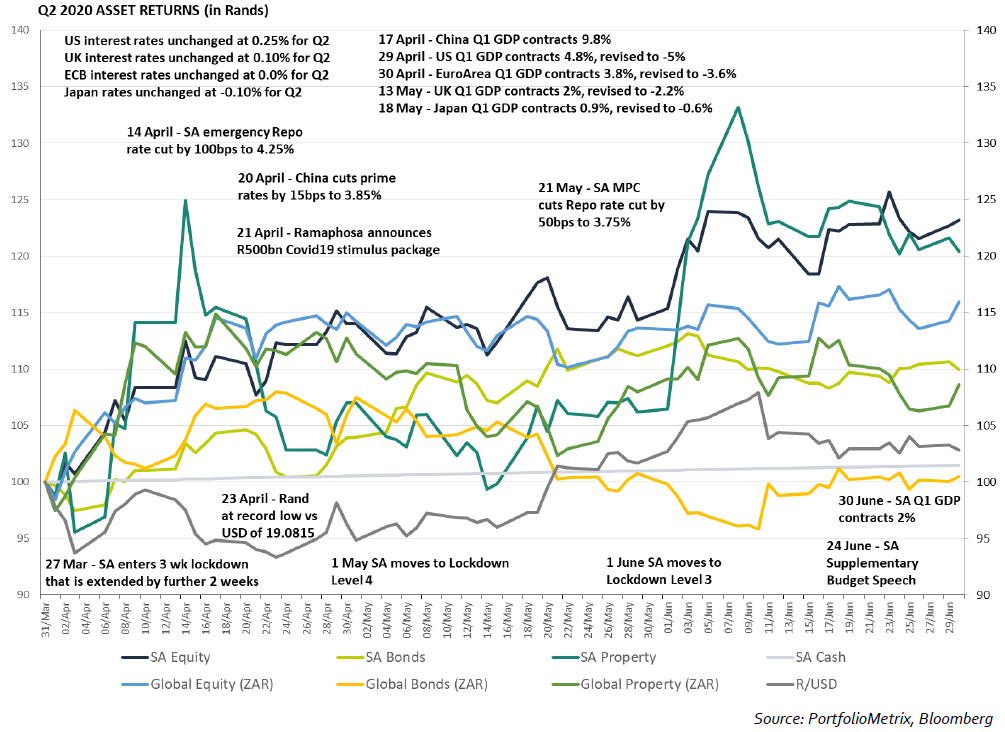 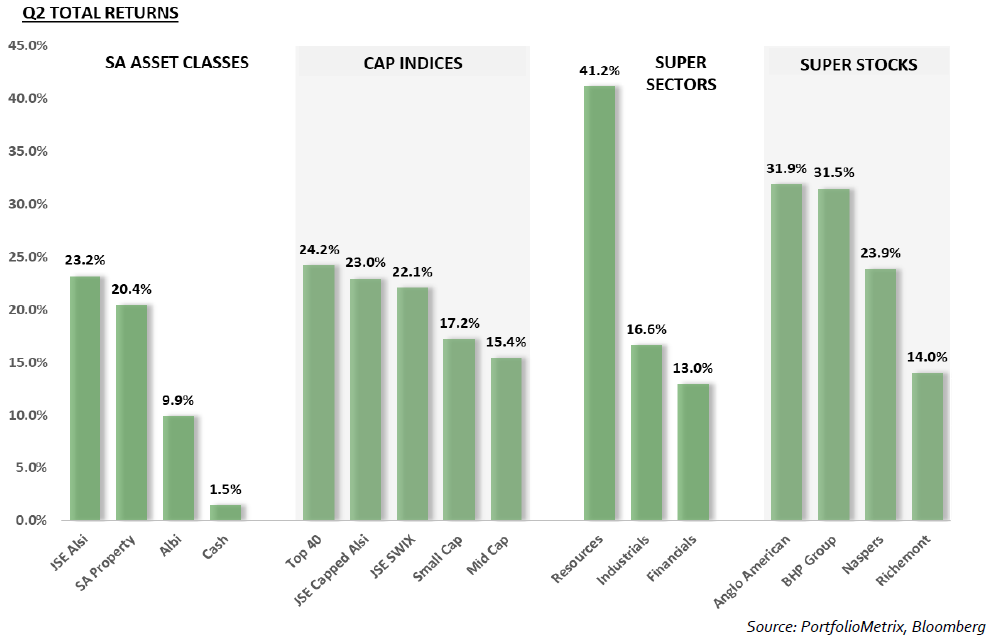 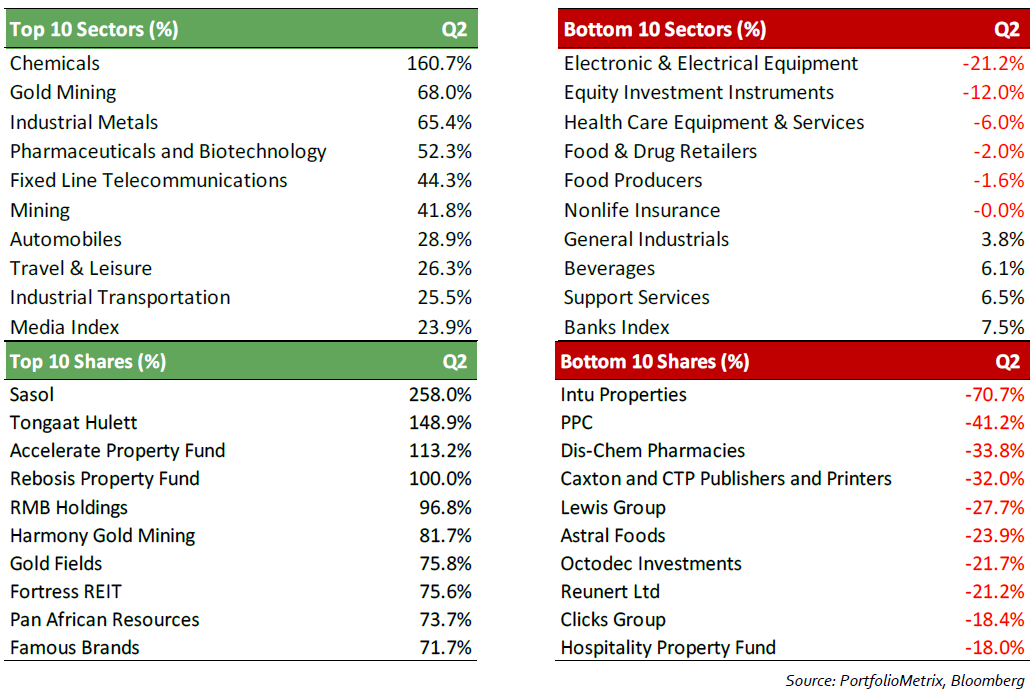 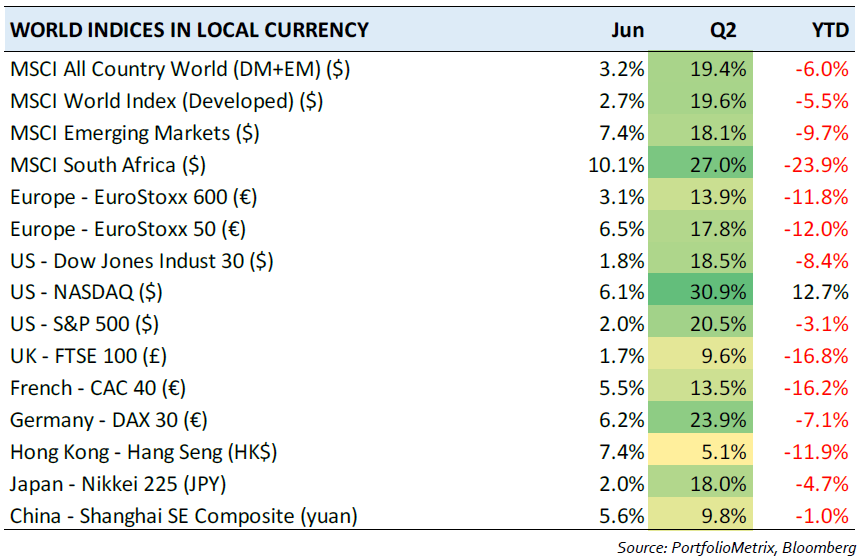 Oil prices bounce off historic lows, however still down over 30% for the year-to-date

Gold is boosted by its safe-haven characteristics, platinum struggles in the recession aftermath

Although we’ve seen a tremendous recovery in risk asset prices in this second quarter, SA equity has noticeably underperformed expectations over the last 1, 3 and 5 years with only the 10 year return beating cash and bonds. The other big standout when looking at the annualized returns in the charts below is the relative outperformance of global asset classes relative to their SA counterparts. This once again highlights the significant benefits of diversification across the asset class spectrum as well as across geographies. For example, an investment in global equity over all periods has significantly benefitted the South African investor.

SA risk assets have detracted from returns whilst global assets (in rand) cushion the blow. 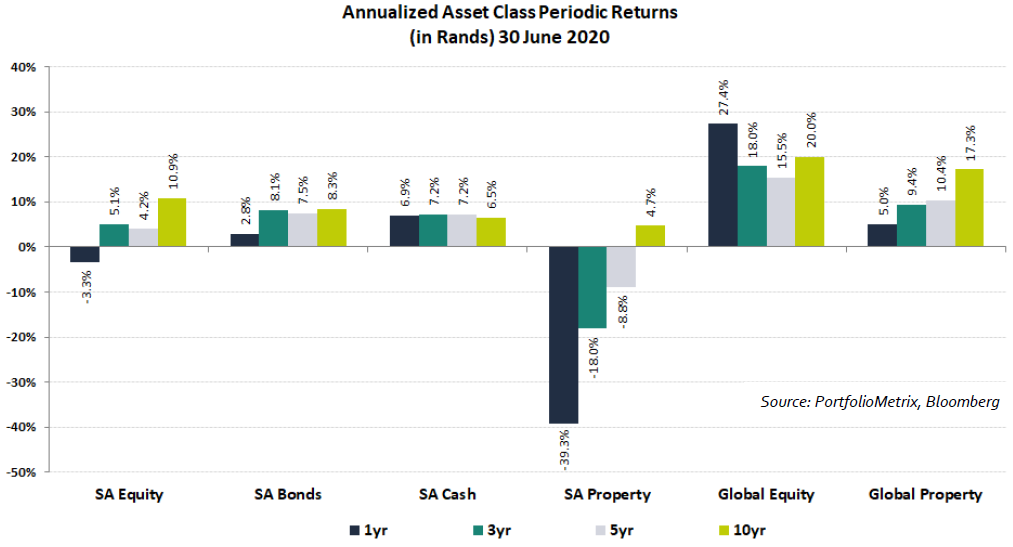 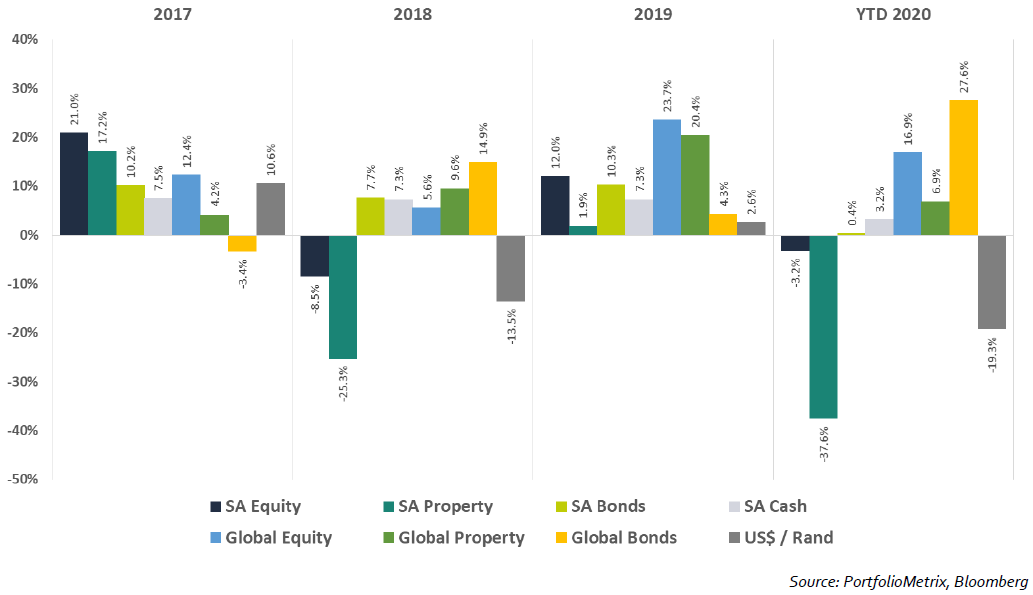 Following the two rate cuts in Q1, the SARB cut a further 100bps in April and another 50bps in May with the repo at 3.75% at quarter-end 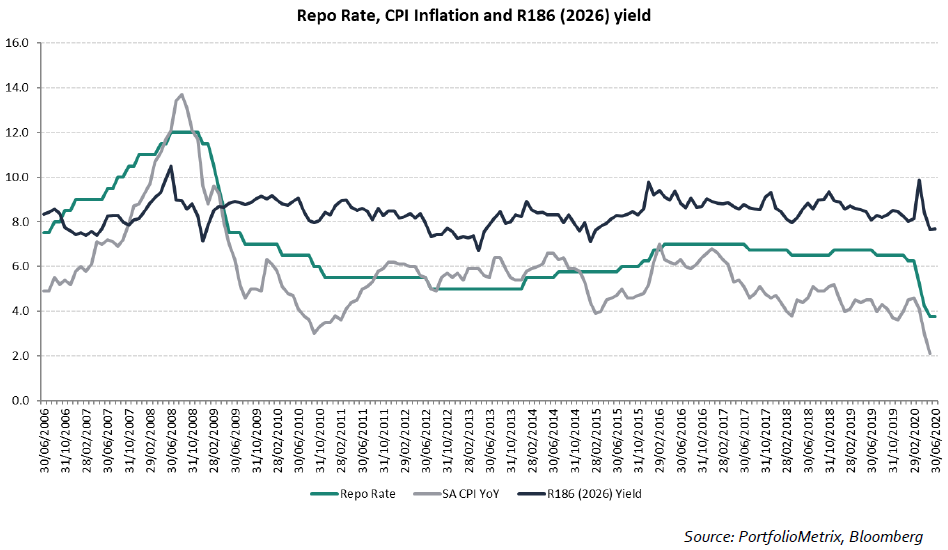 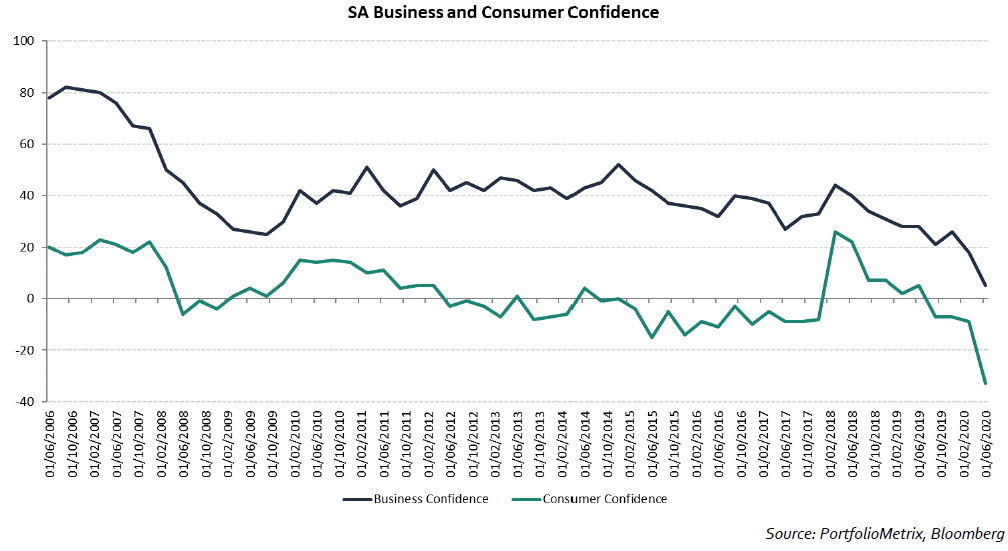 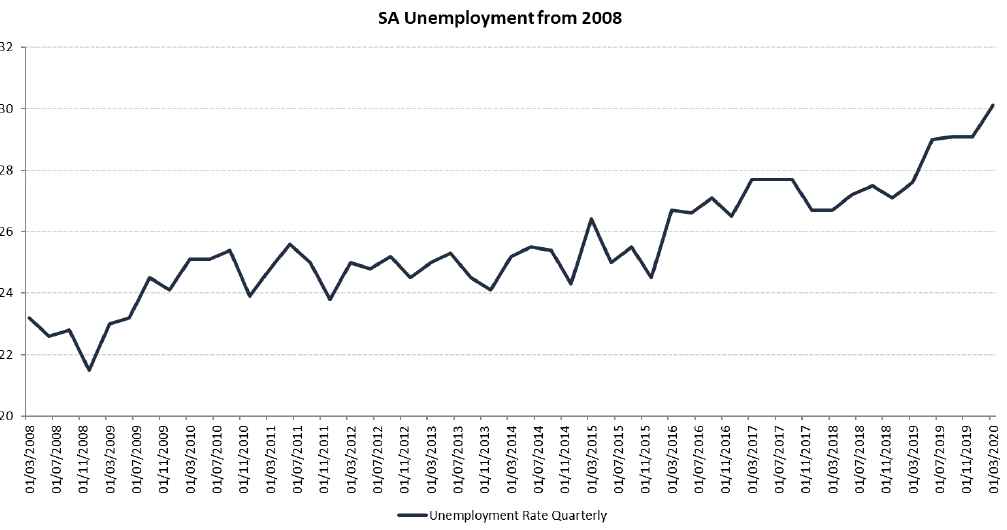 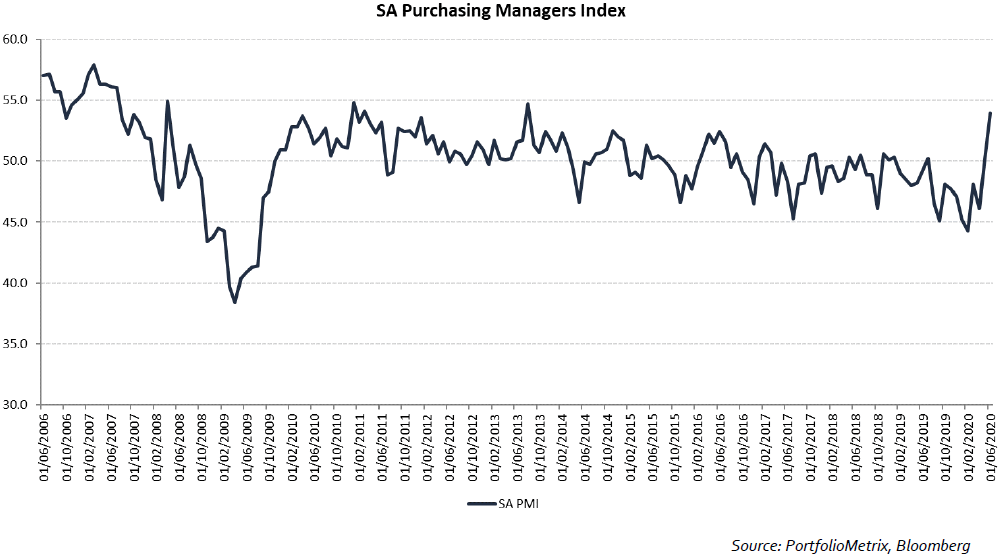 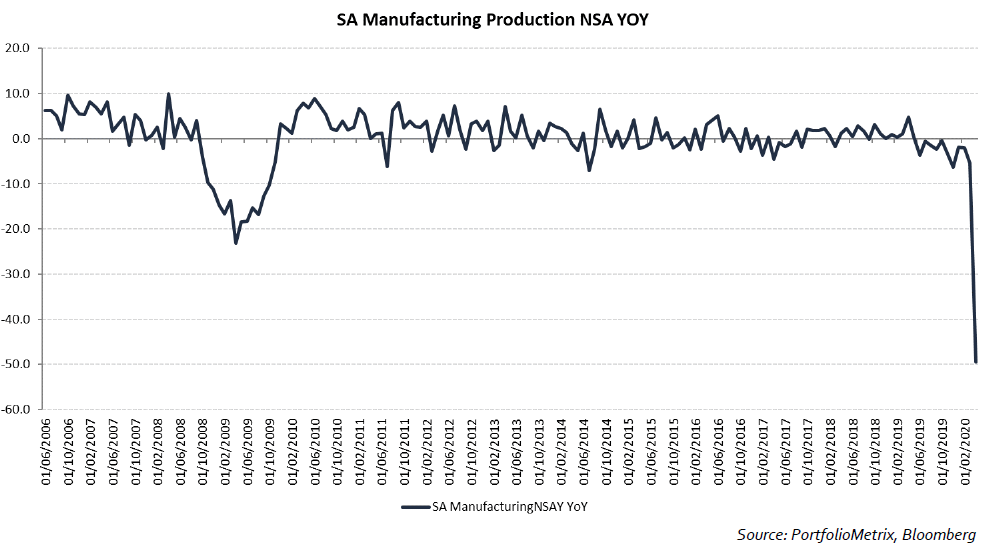 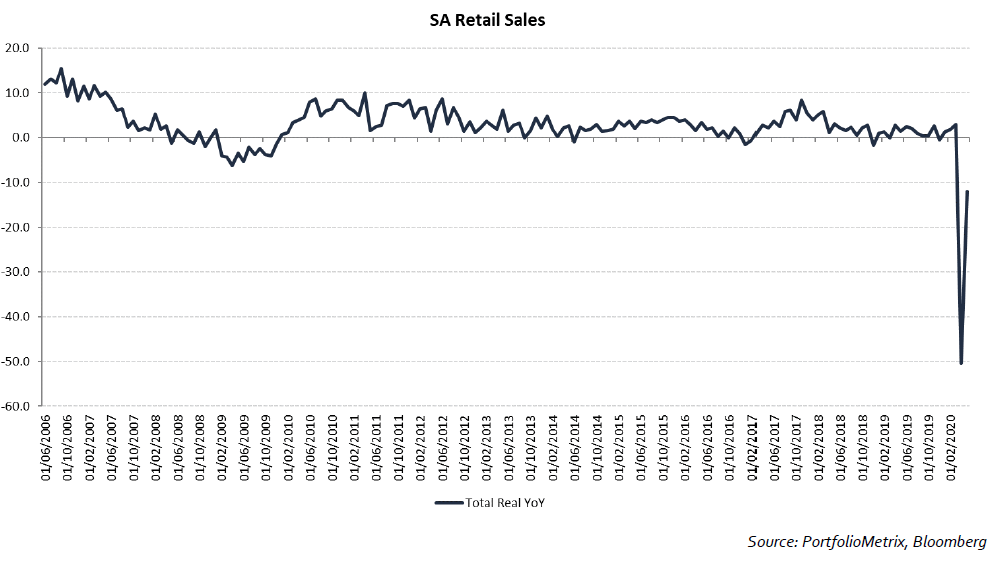 LOOKING AHEAD – A long and bumpy road

What transpired into the fastest market sell-off in recorded history was followed by the quickest ever rebound. 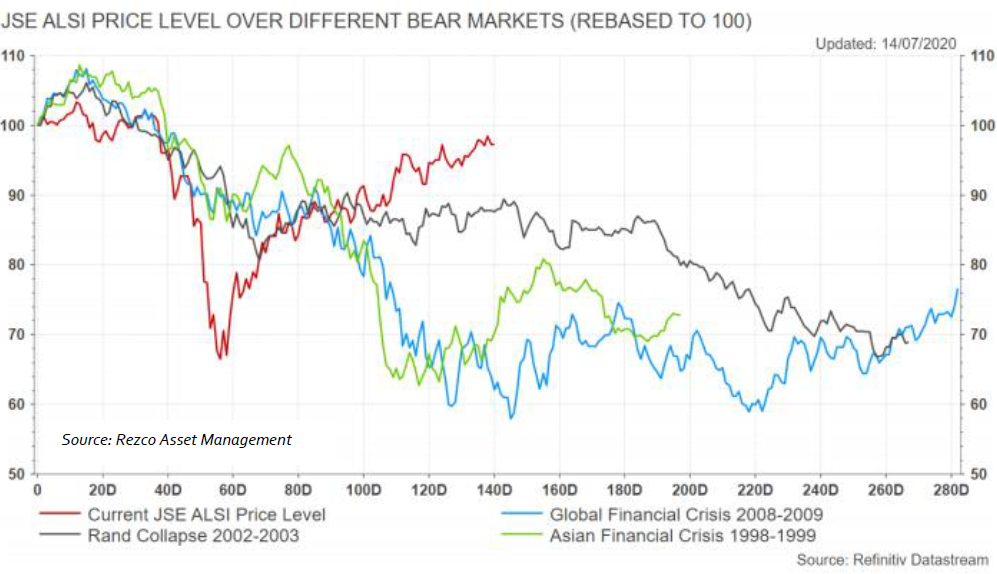 Multiple economic indicators suggest that the global economy began recovering in May, is gaining momentum and may return to pre-pandemic levels by year-end.

After the first quarter, as global COVID-19 cases were skyrocketing and businesses were shuttering, an economic outlook that called for a near-term recovery would have seemed far-fetched. Yet, as July begins, multiple indicators suggest that growth began to rebound in May and even gained momentum throughout June.

While the economics team at Morgan Stanley Research is closely watching the effects of a recent surge in new U.S. COVID-19 cases, data suggest that the global economy could regain its pre-pandemic levels in four quarters, with developed market economies fully retracing their growth path in eight quarters.

“We believe this will be a sharper but shorter recession, and recent upside surprises in growth data and policy action have increased our confidence that this will be a deep V-shaped recovery,” says Chetan Ahya, Morgan Stanley’s Chief Global Economist.

All Eyes on Cases and Cures

No doubt, the pandemic’s unpredictable path remains a key risk to forecasts. New cases of infection globally have recently set highs, as various regions started to reopen, particularly in the U.S. For the moment, however, the growth in new infections appears to be manageable—though the situation remains fluid.

At the same time, biopharmaceutical companies are continuing to make progress on treatments and possible vaccines. “As testing and tracing capacity ramps up, we believe the public health authorities are in a better position to manage the outbreak and a potential second wave,” Ahya adds.

Consumer spending plays no small role in driving an economic recovery and over the past several months, consumers seemed to have adapted, leading to a reduced drag on overall spending. Online shopping in the U.S. has shifted into high-gear, with e-commerce adoption two years ahead of where it was previously tracking.

Although firmer forecasts have allowed economists and strategists to begin plotting what the ultimate economic recovery looks like, the range and shape of this recovery remain hotly debated. With some encouraging and early signs of recovery out of China and other key regions, the likelihood of a swift recovery becomes more tangible.

However, we are already seeing that it won’t all be plain sailing from here. Although largely suppressed in much of Asia and Europe, many emerging markets, including South Africa, are still seeing surging virus cases and deaths whilst the US is seeing significant flare-ups and a resurgence of infections. And although we are getting better at treating Covid-19, we are not yet close to a cure or mass distribution of a successful vaccine.

Away from the corona-crisis, other risks also pose threats to market uncertainty and volatility. US/China friction continues whilst the US election of November draws closer. President Trump’s re-election chances have been severely damaged by a perceived mishandling of the crisis, but there are still four months to go and it’s unlikely he’ll fade gently into the sunset. His election strategy appears to be centred around stoking division and deflecting attention and blame in order to fire up his voter base which could negatively impact markets up to and beyond the election. A Biden presidency brings risks too: higher taxation for US companies and possibly beefed up anti-competition actions which could damage many of today’s market leaders (like Amazon, Google and Facebook).

And of course, closer to home, we are facing possibly the deepest recession and government indebtedness in recent history. This fact alone necessitates a broader and more diverse investment rethink than purely placing all eggs in a SA-centred investment.

Further out lies one potential risk that has not caught the market’s attention as yet – inflation. Right now, we are going through a disinflationary period (falling inflation) as the demand shock of the corona-crisis causes prices to fall. The truly massive stimulus provided by central banks and governments is the right response to try to jump-start the economy and protect jobs, but it is increasing the amount of money sloshing about in the economy.

Suffice to say, whatever the shape and speed of the global economic recovery, the world will mend and PortfolioMetrix is positioned for this eventuality. In the face of such market uncertainty, we continue to stick to our primary defence of diversification and not diving dogmatically down any particular theme, sector or style.

PortfolioMetrix (Pty) Ltd is an Authorised Financial Services Provider in South Africa. The information contained is given for information purposes only and is not intended to constitute financial, legal, tax, investment or other professional advice and should not be relied upon as such. Investments can go down as well as up and past performance is not a guide to the future. Data sourced from Bloomberg, RMB Global Markets, Rezco Asset Management, Morgan Stanley, Citgroup, Prudential Asset Management, Deutsche Bank and SA dailies