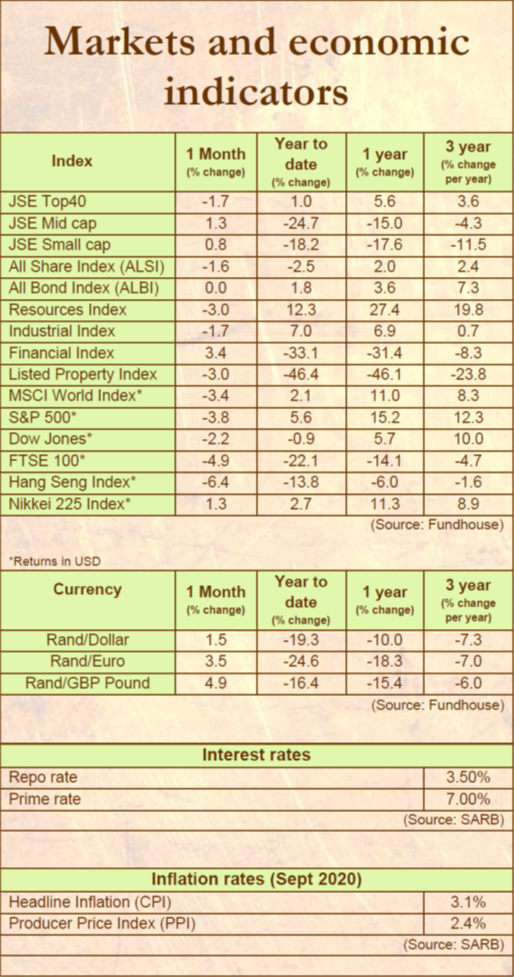 On the 21st of September, South Africa moved to lockdown alert level 1. Early in the month, SA’s official GDP numbers for the second quarter of 2020 were released, indicating a sharp contraction of the local economy with a reported quarter on-quarter decline of just over 16%.

Following a collective 300 basis point cut in the repo rate this year, the Monetary Policy Committee voted to keep rates on hold in September. This leaves the repo rate at 3.5% and the prime lending rate at 7%. SA business confidence rebounded somewhat from the historic low. More encouraging news is that the first high-profile arrests were made with regards to South Africa’s numerous corruption scandals.

Global markets retracted in September with uncertainty around further US fiscal stimulus and the upcoming US elections. Technology stocks, the market darling over the last few years, dragged down the overall market in September. The usually reliable tech heavy Nasdaq ended the month down 5.2%. The year-to-date performance of the Nasdaq (31.6%) is still well ahead of that of the S&P500 (5.6%).

At its mid-September meeting, the US Federal Reserve bank left benchmark rates on hold, as expected. Although still well below pre-pandemic levels, US consumer confidence rebounded considerably in September. This was the sharpest rise in 17 years. September also saw the US unemployment rate fall to 7.9%, down from 8.4% in August. The US economy has now recovered slightly more than half of the 22 million jobs that were wiped out by the coronavirus pandemic.

The first round of presidential debates between Joe Biden and incumbent President Donald Trump also took place in September. It did not take long for the debate to spiral into chaos, leaving investors increasingly worried about the effect that the upcoming election will have on markets.

Disclaimer:
The above information is only for informative purposes and cannot be seen as advice as defined in the Financial Advisory and Intermediary Services Act, 37 of 2002. Although the necessary measures were taken in the preparation of this document, RiG Advisory Services (Pty) Ltd cannot be held responsible for any actions taken as a result of this document. Consult us for personal advice that will be appropriate for your unique circumstances. RiG Advisory Services (Pty) Ltd is an authorised financial services provider (FSP number: 44730).