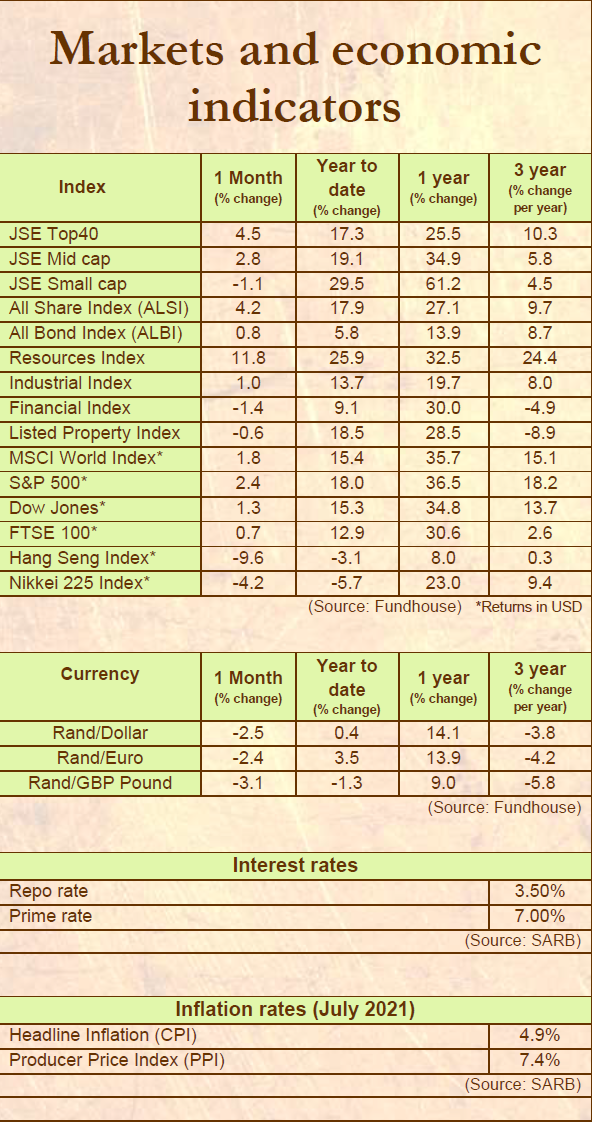 July 2021 was a though month for South Africans, a month that will certainly be marked in history by the social unrest that ravaged the country. What started as protests in response to the incarceration of former president, Jacob Zuma, quickly escalated into wide-scale looting and vandalism. The unrest resulted in over 300 deaths and had a serious impact on supply chains and investor confidence.

South Africans also spent most of July under adjusted Level 4 lockdown. The vaccination rollout programme continued to gather momentum, and by the end of July 7.6m people had been vaccinated.  The Reserve Bank’s Monetary Policy Committee once again kept the repo rate unchanged at 3.50%; the prime rate therefore also remains at 7%.

Commodity markets continued to hold up in July. The boom in commodity prices this year has been extremely beneficial for the SA fiscus and the economy as a whole. Precious metal and mineral exports now represent 52% of SA total exports. The trade surplus widened to a new record high of R57.6bn in June.

Most Global markets had a positive July, although market volatility picked up towards the end of the month. The key new market development that dominated headlines in July was in China, where regulation was proposed to prohibit commercial profit in the online education sector. Investors remained cautious despite China’s regulators saying its policy actions were to improve the sector and create a more equal competitive landscape.

With most market sectors returning to full capacity, including tourism and travel, the US unemployment rate has continued to decline, reaching 5.4% during July. US GDP accelerated by 6.5% during the second quarter, after gaining 6.3% in the first quarter. After a -0.3% decline in the first quarter of the year, the eurozone GDP grew by 2.2% in the second quarter, officially taking the region out of recession.