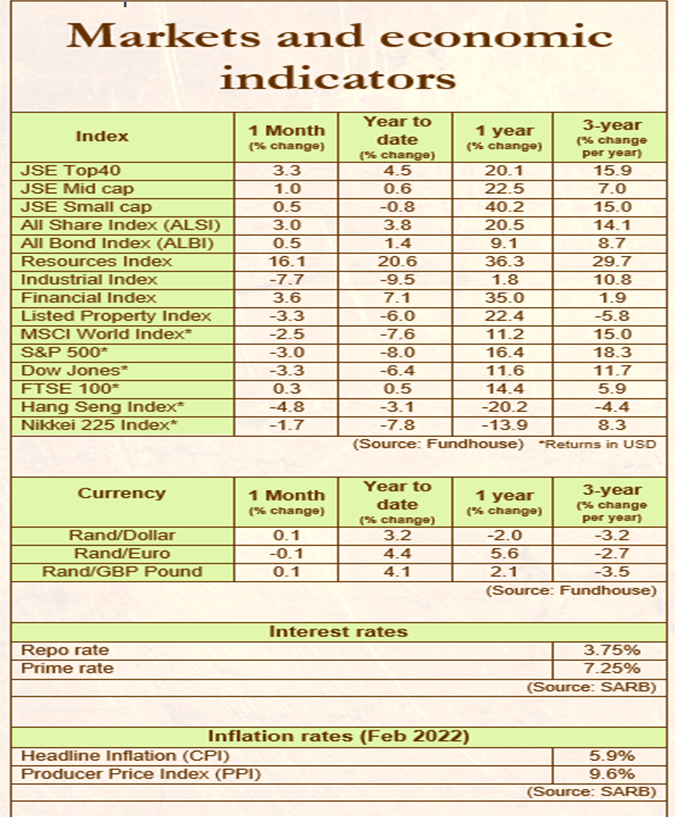 On the 10th of February President Cyril Ramaphosa delivered the State of the Nation Address (SONA). The president also announced the extension of the R350 monthly Covid19 social relief grant for unemployed adults for another year. While offering much needed support to the poor, the grant has placed a significant strain on government finances.

Finance Minister Enoch Godongwana delivered the budget speech on February 23. Economic growth has been revised downward from 4.8% in 2021, to 2.1% in 2022 and averaging at 1.8% over the subsequent three years.  The speech also included some tax relief measures, such as a slight reduction in the corporate income tax rate.

Globally, the month started with a continuation of concerns around elevated global inflation levels as another above consensus US inflation print dominated financial market headlines. The headline US inflation figure for January, released early in February, increased to 7.5% year-on-year, up from December’s 7.0%.

On the 24th of February, Russia launched its invasion of Ukraine, marking the start of the largest military conflict in Europe since World War II. The situation escalated due to fierce resistance from the Ukrainian military and ever harsher Western sanctions.Headlines suggested that Putin had put his nuclear deterrent forces on high alert.

The MSCI Russia Index was down -53% at month end and the Russian currency fell -26%.

Russia’s role as the third-largest oil producer globally, caused heightened anxiety about the impact that the conflict might have on global energy supplies. Brent crude oil spiked 11% for the month, to end February above $100 per barrel. This caused the S&P 500 energy sector to increase +7%  ̶  the only sector to end the month in positive territory.