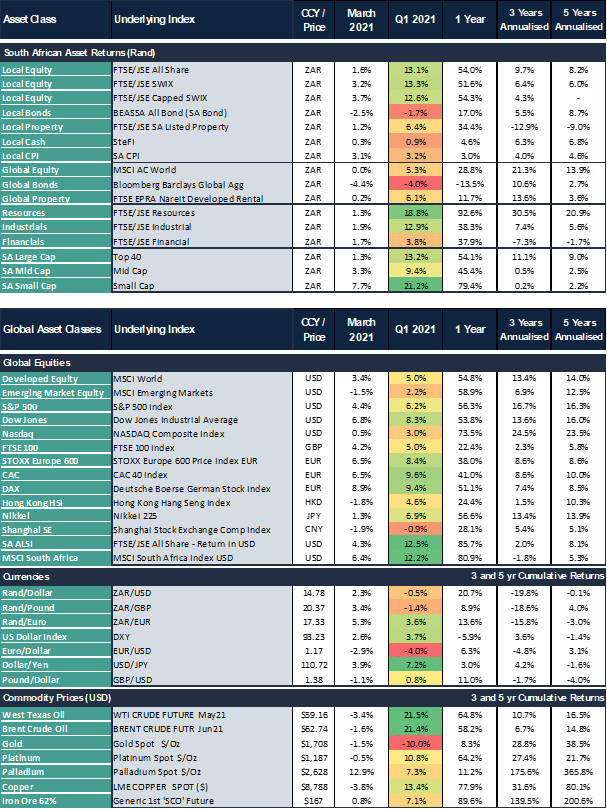 After last year’s false start and paralysing pandemic, the prospects for a sustained reopening of economies and evidence of a tangible global recovery have begun to unfold in the first quarter of 2021. The resultant improving macroeconomic landscape, ballooning stimulus packages and vaccine rollouts has provided the underpin to another very strong quarter for global and SA equity markets, many indices trading very close to record highs.

Asset class leaders for this quarter has been the 13.1% rally of SA equity (JSE All Share Index) but more striking the 21% jump among small cap shares that lagged the Top40 all of 2020. This theme of rotating out of the 2020 large cap growth stock winners (such as Naspers/Prosus) towards the relatively cheaper, cyclical and smaller cap names was evident even in our smaller equity market.

Within the Super Sectors, it was once again the 2020 favourites, resources that benefitted from the rising commodity price complex, with the exception of gold (defensive exit). Oil and industrial metals enjoyed another great quarter in response to mines at full capacity, rising global demand and in many cases supply squeezes in some of the commodity markets.

The rand ended the quarter almost where it started the year, however, its relative strength versus its Emerging Market peers in March was particularly noteworthy. An improving trade balance (good mineral exports), somewhat hopeful revenue collections and tame inflation helped stabilize the local currency when many of our peers felt the brunt of the US treasury sell-off and other political stumbles. (Turkey’s PM fired yet another central bank chief, Brazil and India’s covid cases balloon out of control and Russia faces fresh US sanctions).

On the downside, bond markets across the globe, including the higher yielding SA bond indices, all gave up ground to the riskier asset classes with a strong sell-off in US treasuries becoming a key feature for the quarter.

A primary market theme of Q1 was the flood of fiscal stimulus that the newly sworn-in Democratic Biden government has laid on the table. The stimulus at the end of 2020 ($900 billion) and the relief package signed in early March ($1.9 trillion) equate to nearly 14% of US GDP. The American Jobs Plan announced on the last day in March proposes an additional $2.25 trillion in spending geared largely toward improving transportation, communication, and power infrastructure. The US infrastructure plan will be paired with an additional $1 trillion in spending focused on social programs and is expected to be unveiled in April. Time will tell how much stimulus will be passed by Congress; however, overall fiscal spending is unprecedented and clearly larger than what markets were pricing at the start of 2021.

The promise of all this fiscal aid and better than expected US macro data releases saw a noticeable shift from investors worrying that growth would be too sluggish and bogged down by second and third Covid waves, to now fearing that growth will be too fast. Bond investors quickly began to fear that the party would end before it really got going, and that the path of interest rate normalisation would be sooner than equity markets were betting on. Yields on US treasuries rose sharply with the yield curve markedly steeper and driven mainly by the higher inflation expectations. However the US Federal Reserve Chairman did his best to pour cold water on these heated expectations and continued to reassure investors that the end is not yet in sight.

Thus far, these yield curve adjustments in the US have left growth-sensitive assets (e.g. equities) well supported and financing conditions favourable. Outside the US, the global rise in longer-term bond yields has created some concern, especially in the euro area, where the recovery looks more vulnerable. The ECB responded with increases in its bond purchases to limit further yield increases, while in Japan, the BoJ acknowledged the move in yields by widening the yield curve control band. The pressure on Emerging Market economies has been more pronounced. Higher US real yields, accompanied by some re-strengthening of the USD, weighed on capital flows, thus weakening currencies and deteriorating the inflation outlook on these markets. This already led to some unexpected (Russia) or higher-than-expected (Turkey, Brazil) hikes and more generally means, with few exceptions (Mexico), an end to the EM rate-cutting cycle. That said, South Africa has fared relatively favourably in the EM mix with inflation figures coming in lower than expected and the rand holding up well against a slightly stronger US dollar.

Although very little information has been provided on the efficacy and rollout of the Chinese vaccines, the almost complete eradication of Covid cases would suggest that China certainly has led the world in terms of controlling the pandemic and returning to normality. This has fed into a recovery far faster and stronger than many had expected out of China with incoming data in recent months continuing to surprise on the upside. Robust credit expansion and very strong export performance suggest that Chinese growth will continue to support the global economy (particularly commodity-based Emerging Market economies such as South Africa).

And although slow out of the starting blocks, the success of the US vaccination rollout has far surpassed all expectations with estimates suggesting herd immunity could be achieved during Q2 2021. The US now has the highest daily vaccination rate in the world and accounts for around one in every four vaccines given globally per day. The results of this success are becoming clear, as cases have fallen from more than 250,000 per day in January 2021 to below 70,000 in March. Demand, not supply, will soon become the biggest challenge.

Europe’s relatively slow vaccine rollout and smaller fiscal stimulus means it continues to lag the US in terms of economic performance. However, its pace of vaccinations is increasing, putting the region on track for an economic reopening by the third quarter. 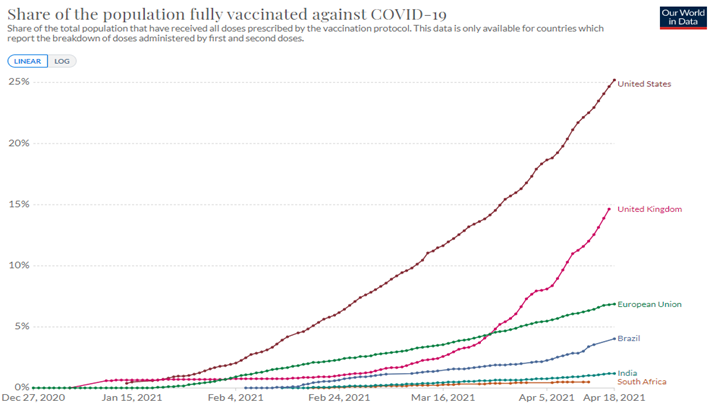 The rotation out of “pandemic winners” and into more cyclical or potential “recovery winners” was a theme that played out all through the quarter.  Momentum also carried the “reflation trade” over from the previous quarter as the prospect of economic reopening in large parts of the world seemed nearer. These purchases were funded by the selloff in defensive assets such as US Treasuries, gold and the Swiss Franc. 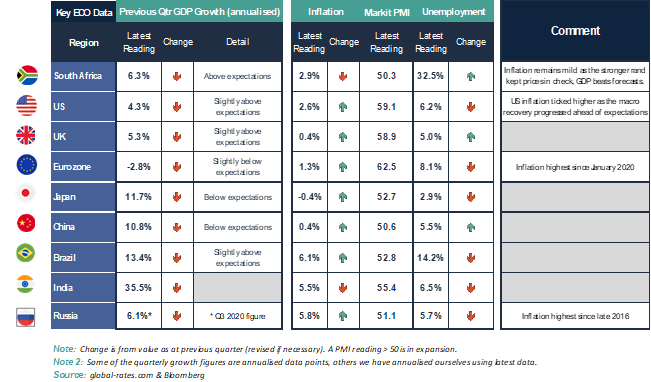 There is no doubt that the cloud that shrouded the globe a year ago appears to be lifting. Vaccinations, coupled with economic resilience from China and accelerating activity in the US, are powerful catalysts that are expected to lift all economic boats in the months ahead. The following summarises some consensus thinking on the path ahead and should guide a more optimistic outlook for 2021:

Diversifying your portfolio is crucial for long-term investment success.

The PortfolioMetrix BCI SA Equity fund outperformed by 13.5% over the past 12 months (53.2% vs 66.8% for the fund) relative to its FTSE JSE Capped SWIX benchmark,

The PortfolioMetrix BCI Bond FoF fund underperformed by 1.2% over the past 12 months (17.0% vs 15.8% for the fund) relative to its FTSE JSE All Bond Index benchmark,

The Stanlib Bond Fund was reintroduced to portfolios. During this transition period the market moved quite aggressively resulting in the unusual performance of the PortfolioMetrix BCI Bond FoF that was below that of its underlying funds. In the long run this move will however benefit investors through a lower portfolio cost.

The PortfolioMetrix BCI SA Property fund outperformed by 1.2% over the past 12 months (34.4% vs 35.6% for the fund) relative to its FTSE JSE SA Listed Property benchmark,

The PortfolioMetrix BCI Global Equity FoF fund underperformed by 0.2% over the past 12 months (27.8% vs 27.7% for the fund) relative to its MSCI ACWI benchmark,

The performance of the underlying funds (versus their respective regional indices) for the quarter is shown below (in ZAR). Funds biased towards value and smaller cap stocks performed best in the quarter.

The PortfolioMetrix BCI Global Bond fund outperformed by 1.8% over the past 12 months (-13.5% vs -11.7% for the fund) relative to its Bloomberg Barclays Global Aggregate benchmark,

The PortfolioMetrix BCI Global Property fund underperformed by 4.8% over the past 12 months (12.5% vs 7.7% for the fund) relative to its FTSE EPRA Nareit Developed Rental benchmark,